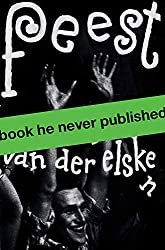 Ed Van der Elsken is one of the Netherlands’ most famous photographers.  In late 2019, the Rijksmuseum and the Netherlands Fotomuseum in Rotterdam acquired Van der Elsken’s entire photographic legacy.  Among the many obscure and forgotten photographs was the design for a photobook called feest (feast). It was compiled by Van der Elsken himself. He created a ‘dummy’ book around 1960, but the project never came to fruition, for unknown reasons.  The Rijksmuseum and Nederlands Fotomuseum remedied that situation by printing this book in the format envisioned by Van der Elsken himself.  He wanted a layout that was modest in format and length. The photos are of festive occasions: people celebrating having fun, dancing, listening to and playing music, taken at fairs and carnivals and on the streets.  Not all of the photos are equally festive.  Along with the numerous fair and carnival photos and the photos taken at parties, some are clearly less celebratory. There is drunkenness, exhaustion, and photos of grim looking protestors and marching soldiers.  Some of the photos had been previously published and were among his favorites.  Others we are seeing for the first time.  It is unknown whether feest was commissioned by a publisher.  Nor is it known how long he first worked on it, and at what point he got stuck.  We know that he had already selected the cover photo (a small fragment of cheering concertgoers with their arms outstretched, from his photogs of the 1959 concert of Louis Armstrong and His All Stars in North Holland), and he had already made notes about the planned length of the book.  The photo selection is interesting. Two thirds of the photos were taken between 1958 and 1961. More than half of the photos were taken in his native Amsterdam.