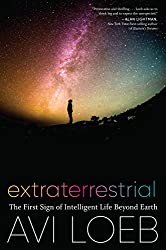 In the fall of 2017, an object was discovered zipping through our solar system at an unusual speed. It was studied extensively, but no one could figure out exactly what it was. One thing was for certain, however: the object came from outside our solar system.  Named “Oumuamua”, (a Hawaiian word for “a messenger from afar arriving first”), this was the first known interstellar object to pass through our solar system.  It stuck around for 11 days, allowing scientists to gather as much data on it as they could.  The author discusses the data is minute detail, making a very compelling case that the object could very likely be a piece of advanced alien technology.  The science presented is pretty heavy, but it’s explained clearly, similar to the way Stephen Hawking does in his books, i.e. you understand what’s being said while you’re reading it, but you’d have a tough time repeating it back if you had to.  It’s fascinating stuff.  Unfortunately, the info about Oumuamua comprises only a small part of the book.  To flesh this material out into a decent sized book, the author pads the pages with information about his family, his career, and his views on philosophy and science, all of which were, fortunately, pretty interesting.  The author does some railing against the scientific community, complaining about how most scientists today need to follow the money rather than follow the data, and that pursuing ideas that aren’t trendy or fashionable might brand you as unfundable, putting an end to your career. Typical bureaucracy.  In any event, the author has a nice, clear writing style, sharing compelling tidbits from both his personal life and his professional life.  The notion that we’ve detected an object that originated from an intelligent civilization outside of our own is truly fascinating, and the author conveys that wonder and excitement on every page.

“Extraterrestrial: The First Sign of Intelligent Life Beyond Earth” by Avi Loeb