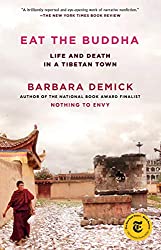 Quick Book Review: “Eat the Buddha: Life and Death in a Tibetan Town” by Barbara Demick

A few years ago, I read Demick’s book “Nothing to Envy”, about life in North Korea, and it was fascinating.  In her new book, she explores another mysterious part of the world, the town of Ngaba, eleven thousand feet above sea level, in Tibet.  It was one of the first places where the Tibetans and the Chinese communists encountered one another.  It’s an up-close account of the lives of ordinary Tibetans during the Chinese occupation.   Demick visited Ngaba three times – in 2013, 2014, and 2015, and she interviewed many Tibetans from Ngaba and in surrounding towns. Like she did with her book on North Korea, Demick really takes us inside the lives of her subjects, with moving personal stories.  Although the interviewees come from all walks of life (a princess, an intellectual, a black marketeer, a son born to a disabled single mother, citizens who took part in the 2008 stand-off against Chinese authorities, and many others), the common thread running through all of their accounts is the richness of their culture and their unbreakable spirit.  The Chinese government’s obsession with the Dalai Lama was frustrating to read, and the many pages devoted to the desperate act of self-immolation as a form of protest, were horrifying. Like many Westerners, I tend to romanticize Tibet as a peaceful, spiritual retreat. Demick shows what it’s really like to be a Tibetan nowadays, and the heartbreaking struggle to try to preserve one’s culture, religion, and language in the face of a government relentlessly determined to crush it.

“Eat the Buddha: Life and Death in a Tibetan Town” by Barbara Demick