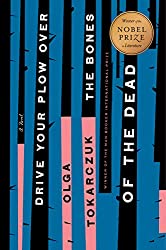 Quick Book Review: “Drive Your Plow Over the Bones of the Dead” by Olga Tokarczuk

This might be the best novel I’ve read all year.  This book is a combination of fairy tale, murder mystery, and philosophy book.  Who has the right to live?  Who has the right to kill?  Who determines who is sane or not?  It’s the tale of an intelligent, quirky old woman living in a remote Polish village near the border of the Czech Republic.  She spends her spare time studying astrology, reading and translating the poems of William Blake, wrestling with her many ailments (some real, some imagined), and maintaining the summer homes of her well-to-do neighbors during the off season.  When her neighbor (a man who she has named “Big Foot”) suddenly dies, and then other folks in the village turn up dead, the woman formulates her own theory about who’s behind these murders.  Is there something to these theories, or is she just a crazy old eccentric?  The book is totally delightful to read.  The woman (Janina, a name she hates) is a fascinating character.  The language used to express her thoughts is so lovely and descriptive, so logical and intelligent, that you’re convinced that she must be right, even as she’s describing something that is clearly nuts (such as a detailed list of court trials of various animals throughout history).  I personally related to her very strongly, mainly because she makes no secret of her preference for the company of animals over that of humans.  Her personal observations and theories are amusing and thought-provoking, and the other characters in the book are also interesting and vividly described.  As quirky as the woman is, she’s totally charming. She assigns her own names to people, like her neighbor Oddball, her friend and former student Dizzy, and the saleswoman at the clothing store, Good News.  She ponders the proverbs of William Blake.  She has a very keen sense of observation. She fights the patriarchy. She’s feisty and unforgettable, one of the most memorable main characters of any book I’ve read.