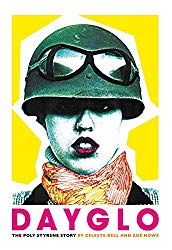 Back in the late ‘70s, when punk music was all the rage, I became fanatically obsessed with it.  I especially loved British punk and was very into The Sex Pistols, Clash, Stranglers, Buzzcocks, Jam, and countless other punk bands. One major favorite, though, was the band X-Ray Spex, led by the brilliant, talented singer Poly Styrene (born Marion Elliott).

Poly’s lyrics, about genetic engineering, corporate enslavement, climate change and environmental pollution, and the effect of consumerism and advertising on our identities, was very ahead of its time and seems more relevant today than ever.

Although the band only put out one album and a few singles, it made its mark on the music world.  This book, written by Poly’s daughter Celeste Bell and writer/musician Zoe Howe, is an oral biography of Poly, as told through interviews with band mates, family members, lovers, friends, and other musicians.  The book is loaded with rare photos, lyric sheets, and Poly’s own artwork.  It takes you through her childhood in England, the formation and ultimate breakup of the band, her other musical endeavors (many of which I never knew about), her religious conversion (she joined the Hare Krishnas), her bipolar disorder, and ultimately, her rapid decline and death from breast cancer.

I have nearly everything X-Ray Spex ever recorded and I listen to it frequently to this day, and even more so now that I’ve read the book.  This is a limited-edition book.  Devoted fans of the band should seek it out.  Others who may be curious about the band need only peruse YouTube to see what she and the band were all about, like this clip of the band doing what I suppose is their signature song, “Oh Bondage, Up Yours!”

Brilliant in every way.