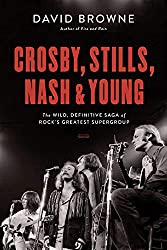 A long, very well-researched book that covers the band, from the early days in their respective former groups (Buffalo Springfield, the Byrds, the Hollies) the group’s initial formation, the countless breakups and reformations, and their solo careers.  The book gives great insight into the personal dynamics between the band members: the constant ego clashes (mostly due to Stills’s enormous ego), Neil Young’s unpredictability (will he show up to the studio? Will he show up for the tour?), and drug issues and health issues that beset every member at one time or another.  It also chronicles David Crosby’s near self-destruction in detail (although not as detailed as in Nash’s memoir, which I read last year).  The best part of the book, for me, were the early chapters, when they were making their best music as a group, in my opinion.  As the book went on, you start to lose track of the constant reunions and breakups; it seemed like it was happening every ten minutes.  I’ve been a Neil Young fan for decades, and I was interested to read about the early phases of his career.  Still, through it all, I feel that CSN had only one really great album (the first one), and CSNY also only had one standout (Déjà vu).  Neil has had multiple great solo albums, many of which I listen to regularly.  If you can handle the drama, the egos, and the drug use, and if you’re already somewhat familiar with their music, then you’ll find this an interesting (but exhaustive) read.