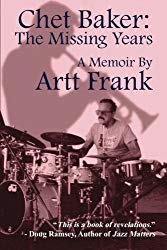 I found this book in a bookstore in Amsterdam.  I’ve been a Chet Baker fan for years (I have over 200 of his albums).  Most of the books about Baker focus on the salacious.  This book promised a different take on the man, and it delivered.  A very personal memoir by the jazz drummer Artt Frank.  Frank befriended his musical hero, Chet Baker, at a time in Baker’s life where he was struggling, unable to get live gigs or record deals.  Frank offered unconditional friendship, looking after Chet while he fought to get off heroin, and doing everything he could to jumpstart Baker’s career.  Frank has an amazing memory, and is able to recall the many conversations he had with Baker in great detail, affording a real glimpse into Baker’s life and the jazz world at that time.  Frank isn’t a professional writer, and the book has many typos and grammatical errors, but it didn’t matter.  I really enjoyed reading about Frank’s devotion to Baker.