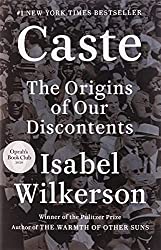 Quick Book Review: “Caste: The Origins of Our Discontents” by Isabel Wilkerson

This book received an enormous amount of praise and acclaim and it had been on my reading list for a while.  Well, it certainly deserves the accolades.  Race certainly colors nearly every aspect of American society.  But beyond race, there is another system that is even more powerful, a caste system that we don’t openly speak about, but that strongly influences our lives, our behavior, and our future.  The author very convincingly supports her premise that race in America is actually a caste system that closely mimics those in India and in Nazi Germany.  In fact, the Nazis used American laws regarding race to design their own oppressive system; we were their role model. The book starts out by introducing and explaining her premise, and then follows through with how our caste system evolved, with many depressing and harrowing examples of how it has been enforced over the centuries.  The parallels between the ways Jews were dehumanized in Nazi concentration camps and how blacks were dehumanized on plantations in the south are striking and shameful.  The author occasionally gets personal, as she relates several specific examples of how she herself has been victimized more by caste issues than race issues. This is a very important book for understanding how a caste society is built and how it functions, and how it fights to keep those at the top and the bottom in their place. A very interesting and insightful read.

“Caste: The Origins of Our Discontents” by Isabel Wilkerson