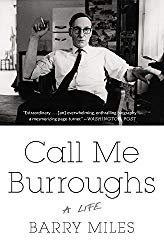 A huge, very detailed, excellent biography of a very interesting character.  I’ve always had a fascination for the so-called “beat” writers (although Burroughs, as I learned, bristled at being categorized as such), and WSB was undoubtedly the most interesting of the bunch.  The book chronicles, in extensive detail, the insanity that gripped much of this man’s life.  The myriad places he’s lived (New York, Spain, France, Mexico, Morocco, Kansas, etc.), the company he kept (Ginsburg, Gysin, Huncke, Kerouac, Corso, countless others), his fascination with guns, his love of cats, his sexual proclivities (men and women; mostly men), his pioneering work with cutting up and re-assembling his words, his collage experiments, his brief immersion in Scientology, his late career as a painter, his evolving into an icon of coolness, and of course his lifelong obsession and prodigious consumption of drugs and alcohol.  Heroin, morphine, opium, methadone, marijuana, peyote, hashish… you name it, he’s not only done it, he’s become addicted to it.  Countless episodes of rehab.  The murder of his wife (by his own hand), the neglect of his son, the deaths of his friends, and his own death, at the age of 83.  A very well-researched biography of an unforgettable individual.