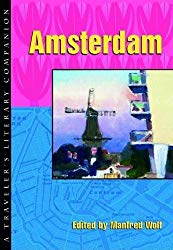 This delightful little book is a collection of stories, both fiction and memoir, all of which have Amsterdam as one of the characters. The stories are all penned by Dutch writers. In some stories, the presence and feel of the city is barely noted, while in others, the city is the main character.

The stories are grouped by the parts of the city that they describe: the canals, the Jordaan, the Red-Light District, Gay Amsterdam, Jewish Amsterdam, etc. Some tales were lightweight, while others were absolutely brilliant,

“Soft Landings” by Remco Campert. This was one of the best short stories I’ve ever read. I was totally engrossed.

“The Decline and Fall of the Boslowits Family” by Gerard Reve was also terrific.

Reve’s book “The Evenings” is considered a Dutch masterpiece. I read it last year and I really liked it, so I was glad to have the opportunity to read another work by him.

I spend two to three months a year in Amsterdam, and these stories took me on an odyssey through the city’s rich past, making me feel even more connected to the city. A good book for anyone enamored with Amsterdam.