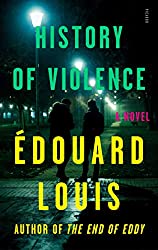 Quick Book Review: “A History of Violence” by Edouard Louis

This book is a memoir (the book cover calls it an autobiographical novel) in which the author recounts the story of how he was raped and almost strangled to death by a man he took back to his apartment for a one-night stand.  The tale is told from several viewpoints: mainly the author, but also by his sister, and his friends Geoffrey and Didier.  He weaves their contrasting opinions in with his own, which was confusing initially, but I quickly got used to the narrative jumping from person to person. For example, the narrative starts out with Edouard telling the story, and then it shifts to Edouard’s sister retelling the story to her husband while Edouard listens in, correcting her in his head and he recounts to the reader how it really happened. I thought that was a pretty clever way of telling the story. The book does digress in a few directions, delving into the perpetrators imagined childhood, for example, but the main narrative thread is pretty gripping.  The book is less about the crime and more about the lies we tell ourselves, the ways we cope with trauma, and the importance of friendship.

“A History of Violence” by Edouard Louis