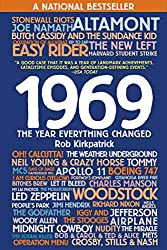 Quick Book Review: “1969: The Year Everything Changed” by Rob Kirkpatrick

The 60s are my favorite decade. I was born in 1960, however, so I was too young to really understand a lot of what the country was experiencing at that time.  As I grew older, I came to appreciate the 60’s much more.  I’m drawn to books about the 60’s – the music, the politics, the culture – and I probably read two or three every year.  While most people would cite 1968 as the most pivotal year in that decade (and I would agree), I personally have little recollection of it. In 1969, however, I was 9 years old, which is old enough to clearly remember some major events, such as the Mets, Jets, and Knicks becoming champions of their respective sports (and that glory that it brought to us New Yorkers), Neil Armstrong walking on the moon, and a lot of the music.  This book focuses specifically on the year 1969, and it was nice reading about events that I actually remembered; the book felt more personal, rather than like a history book.  The book covers a lot of topics, from big movies (Butch Cassidy and the Sundance Kid, Easy Rider, I am Curious (Yellow), Midnight Cowboy), cool music (Neil Young, Led Zeppelin, The Stones, Hendrix, Woodstock, Altamont), sports (the Mets and the Jets), politics (the Vietnam War, Nixon, the Moritorium), the Zodiac Killer and Charles Manson, the Stonewall Riots, and much more.  Each topic is given enough detail to not be superficial, but doesn’t get bogged down in any one topic.  If you have a particular fondness for the year 1969 (and I do), this book will leave you satisfied.