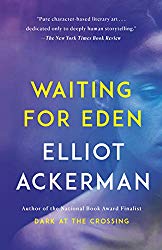 Very interesting, well-written novel told from the point of view of a dead soldier who is waiting for his hospitalized, severely injured fellow soldier to die and join him.  Initially unable to speak or communicate, the injured soldier suddenly regains the ability to understand his surroundings, and starts to realize some troubling truths about his marriage, and what may have occurred before his final deployment.   Excellently written and compelling throughout.