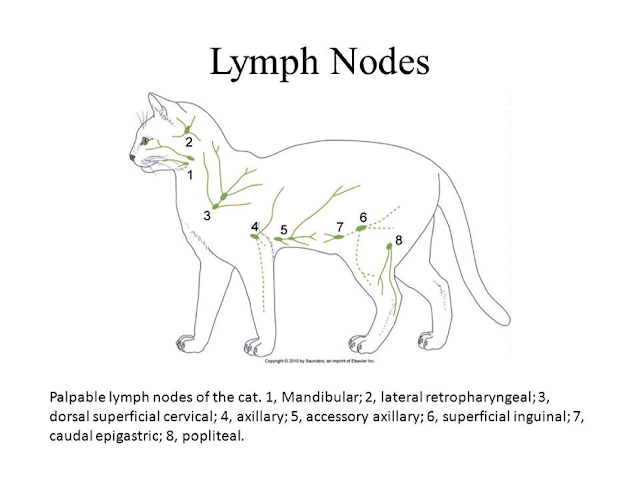 Feline Body Parts – The Lymph Nodes of a Cat

I’m sure you’ve heard of them, but do you really know what they are, or what they do?  I’m talking about the lymph nodes, important structures that we don’t think about much, but play a crucial role in a cat’s ability to fight off infections.   Lymph nodes are small, oval shaped organs that are dispersed throughout the body.  They are a part of the lymphatic system, a branch of the immune system that plays an important role in the development of the body’s immune response.  The lymphatic system consists of vessels that run throughout the body, in a similar fashion as arteries and veins.  Instead of blood, however, the fluid that flows through the lymphatic system is called lymph, which is rich in protein and white blood cells.  Cells of the immune system circulate throughout the lymphatic vessels in the body.  As lymph flows through these vessels, it passes through at least one set of lymph nodes, and often several sets, before ultimately emptying into the general circulation, where it mixes with blood.  The lymph nodes are the major sites in the lymphatic system where the immune cells gather.

The main job of the feline immune system is to protect and defend the body against harm by fighting off invading substances, which we call antigens.  When an antigen invades the body, it eventually encounters the lymphatic system, and eventually a lymph node.  Here, it stimulates a discrete population of lymphocytes (a type of white blood cell) in the node.  This causes those lymphocytes to multiply and transform, or become “activated”.  These activated lymphocytes mount an immune response to the antigen, for example, by producing antibodies that neutralize the antigen.  When the lymphocytes in the lymph node multiply, the lymph node becomes enlarged.   The medical term for enlargement of the lymph node is lymphadenopathy.  Us humans usually refer to this as “swollen glands”.   As a veterinarian, I perform hundreds of physical examinations every year.  Every veterinarian performs a physical examination in his or her own style, making sure to evaluate all of the body systems.  Assessment of the size of the lymph nodes is unquestionably a part of every veterinarian’s physical assessment.

Enlargement of the lymph nodes is often discovered as an incidental finding during physical examination of the cat.  Now and then, a cat owner brings the cat to the vet because of symptoms related to lymph node enlargement, for example, difficulty swallowing due to enlargement of the lymph nodes in the back of the throat.  Sometimes a cat owner will bring me their cat because they detected a lump, which turns out to be a lymph node, while patting or stroking the cat.     The age of the cat is important when considering the significance of lymph node enlargement.  Kittens and young cats are exposed to a variety of antigens early in their lives, and an increase in lymph node size is an expected response by the immune system.  As cats mature, lymph node size usually decreases and the nodes often become more difficult to feel in older animals.  However, in geriatric cats or cats that have lost weight due to illness, the loss of body fat around the lymph nodes may make the lymph nodes appear more prominent than expected, and are easier to feel.   As noted above, stimulation of the immune system by invading antigens is a common cause of lymph node enlargement.  Sadly, cancer is an equally common cause.  The cancer can arise from the lymph node itself.  This is called lymphoma, and is the most common cancer found in animals.  Cancer arising in other parts of the body can also spread to the lymph nodes.  This is called metastatic cancer, and the cancer is said to have “metastasized” to the lymph nodes.    Figuring out the cause of lymph node enlargement may require a variety of tests, including blood and urine analysis, x-rays, and ultrasound.  Ultimately, a definitive diagnosis often requires obtaining a sample of cells from the node itself.  This is usually achieved either by aspiration cytology or by surgical biopsy. Aspiration cytology is a procedure in which a needle, attached to a syringe, is inserted into the lymph node.  Suction is applied to the syringe so that cells from the lymph node are sucked or “aspirated” into the hub of the needle.  The contents are then sprayed onto a microscope slide and are sent to a laboratory for interpretation.  The advantage of this procedure is that it’s non-invasive and inexpensive.  A disadvantage is that the aspirate may not yield enough cells to make a diagnosis. Biopsy of the lymph node is the definitive test in evaluating lymph node enlargement.  Depending on the size and location of the node, either the entire node is removed (this is called “excisional biopsy”), or a small piece of the lymph node is removed (“incisional biopsy”).  The specimen is evaluated by a pathologist.  Treatment is based on the biopsy results: infections are usually treated with antibiotics; cancer is treated by chemotherapy, surgery, radiation, or a combination of these.