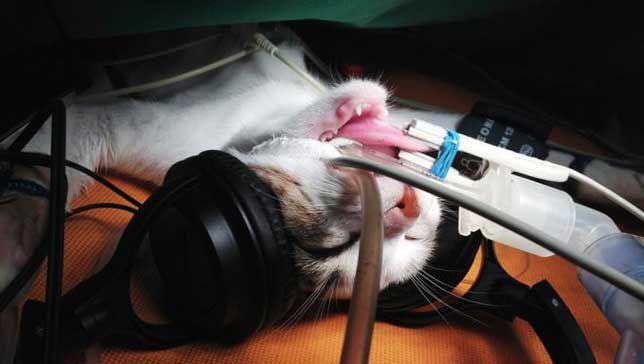 The Effect of Music during Feline Anesthesia: Vivaldi vs. Van Halen

In an issue of the Journal of Feline Medicine and Surgery there was a pretty interesting article about the effect of various genres of music on a few parameters of feline anesthesia.  Being a big music fan myself, I was intrigued.

Twelve cats that were scheduled to be spayed were fitted with little kitty cat headphones that completely covered their ears, and were exposed to 2 minute excerpts of music representing three different genres – classical, pop, and heavy metal at three different times during their surgery.  A medical monitor measured the heart rate.  and digital calipers measured the pupil diameter.

The conclusion:  cats under general anesthesia do indeed process auditory stimuli.  So, depending on the type of music being played in the surgery room, the anesthesiologist may be able to administer a reduced anesthesia dose, minimizing undesirable side effects.

I checked the “materials and methods” section to see exactly what the researchers used as representative of the genres.  Their classical choice was Samuel Barber’s Adagio for Strings (Opus 11).  The pop sample was “Torn” by Natalie Imbruglia.  For heavy metal, they used “Thunderstruck” by AC/DC.

I’m trying to envision a cat, under anesthesia, with over-the-ear headphones, being forced to listen to Natalie Imbruglia.  Doesn’t this violate animal cruelty laws?

Next time you’re at your veterinarian’s office, recommend this nice delightful playlist of music to spay to.