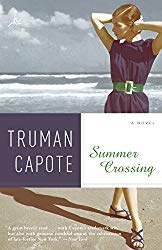 Capote’s first novel.  Really fabulous.  It’s the story of a young socialite and the risky romance she gets involved in.  The novel is set in New York in 1945, and is somewhat reminiscent of Breakfast at Tiffany’s.  Beautifully written.  Very poetic, lyrical prose.  Apparently, the manuscript was found in Capote’s apartment after his death, with instructions for the housesitter to put all the trash out on the street, including this manuscript.  The housesitter kept all of these papers, and this appears to be his first true novel, written before Other Voices, Other Rooms, and published more than 50 years after his death.  There isn’t much of a plot, admittedly, but the writing is so wonderful, and the world of these New York socialites is so vivid, and the ending was surprising and unexpected. (Sorry, no spoilers here.)