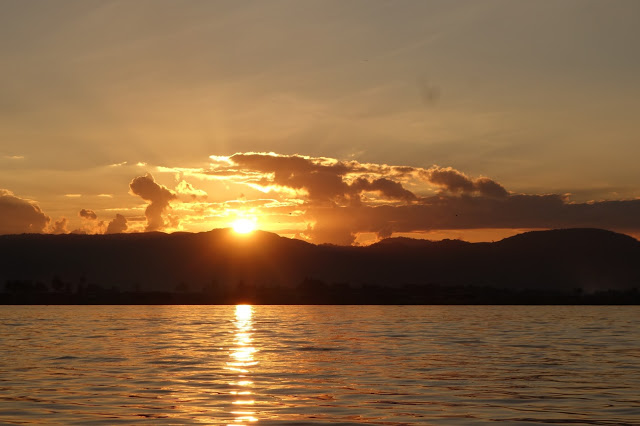 My Trip to Burma: The Phaung Daw Oo Pagoda, another beautiful sunset, and goodbye to Inle Lake.

After lunch at the Inthar Heritage House (and a good hour spent playing with the cats at the sanctuary), we hit our last site, just a little south of Ywama. It’s the Phaung Daw Oo Pagoda, and it is the most important religious site in the area.  Inside are five small Buddha images at the central shrine.

The pagoda is the site of the 18 day-long Phaung Daw Oo Festival, held in September and October.  It is considered one of the biggest festivals in Burma.  At this festival, four of the five revered Buddha images are paraded around the lake in an elaborate barge pulled by longboats.  The boats are manned by hundreds of people who propel the boat using the famous one-legged rowing technique that I’ve written about so much.  Pilgrims from all over the country come to this festival to pay homage to the images.

Women are not allowed to ascend the central shrine.

We weren’t there at the time of the festival, but it was interesting nonetheless.  What makes it so interesting is the fervor with which visitors cake the gold leaf onto these statues.  Over the years, they have lost any semblance of human shape, and are now just five gold blobs!  It’s crazy.

This gold leaf concession was, well, a gold mine.

At the souvenir shop there, they were selling figurines of the five statues.  But they didn’t depict the original Buddhas.  They depicted the current blobby Buddhas!  Crazy! Time to head back to Nyaungshwe, pack up, and get ready to fly to Mandalay tomorrow.  I loved Bagan, but I think I liked Inle Lake just as much.       As we wrap up our time at Inle Lake, I couldn’t help noticing that on the lake’s eastern shore is a gash in the landscape.  It’s a construction project that will triple the number of hotel rooms at Inle Lake.  Can the lake’s fragile infrastructure support such a massive influx of tourists? The lake itself is silting up from unsustainable farming practices, and the narrow waterways, which we had the good fortune of exploring, are starting to get crowded.  The long-term inaccessibility of this area is a major part of the beauty of it – indeed the beauty of Burma.  I suppose the big question remains: as this area becomes so much more accessible, will it even be worth accessing?  I’m optimistic, especially given the good work of the Inthar Heritage House, which is dedicated to preserving the Inle Lake way of life.      My parting images of Inle Lake: sunset on the lake as we head back to the jetty.