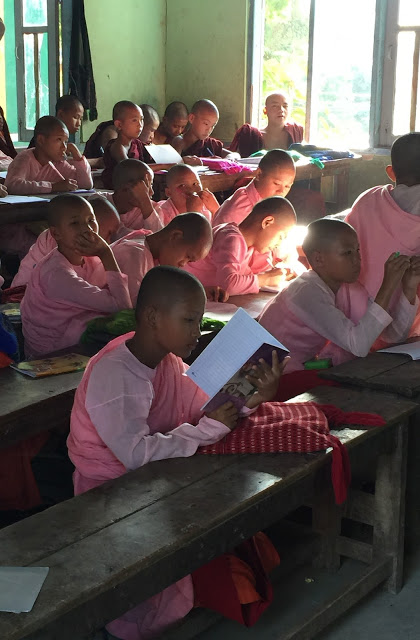 My Trip to Burma: Sagaing Hill, Nunlets and Monklets, and the 45 Buddhas of Umin Thounzeh

We crossed the Ayeyarwaddy and quickly arrived in Sagaing, a low-key city just 25 km south of Mandalay.  Sagaing is the capital of the Sagaing Region, which stretches all the way north almost to Tibet.   Sagaing has largely devoted itself to spiritual matters. Today, around 6000 monks live in the numerous monasteries dotted around the town.  The main reason to come here is for Sagaing Hill.

Before Sagaing Hill, however, our guide decided to take a detour.  Hearing us talk about monks and nuns, and seeing how much we liked the children we encountered in Burma, he took us to the Aung Myae Oo Monastic Education Center.

The education they get here is free, and it is considered an honor for a family to have a nun or a monk in training in one of these schools.

We saw so much here.  Some kids were sitting in little groups in the courtyard, with a teacher, receiving a lesson.

Other kids were taking classes in their classroom.

Other kids were outside, playing with their classmates.

I don’t have to do much in the way of narration here.  The pictures really do speak for themselves.

This is my favorite little series of portraits.  I saw these three little nuns in the window and asked if I could take a picture.  I took several.  All were good, but the last one was really special.  All three were staring at the camera, and he look on the littlest nun’s face is priceless.  Check it out below.

If you wait patiently enough, you capture the perfect portrait.   I think this is my favorite photo of the entire trip.

Our next stop was Sagaing Hill.  Rising from the bleached west bank of the Ayeyarwady, Sagaing Hill is a modest rise (250m high) bristling with so many Buddhist spikes that it looks like some kind of Burmese Hellraiser.  It’s one of the great spectacles of Upper Burma.

Inside, it’s very nice, with your requisite Buddha images, etc.

The terrace is beautiful and colorful.

The golden stupa at the top of the hill was resplendent.

The views from the top are fantastic as expected, with the ascent from Thall Ta Pan Street being the best part of the experience.  It takes about 25 minutes to get up to the top, and the covered pathway gets steeper as you go.  There were a bunch of monks hanging out at the top, enjoying the view.

As luck would have it, there were a few cats on Sagaing Hill, enhancing an already great visit.

After the 8/8/88 uprising, the people were still angry at the military government for the brutality they showed to the people, viciously murdering so many civilians.  For five months afterward, Sagaing Hill was closed.  When it opened, a story appeared that described the miraculous appearance of an extra finger on the Buddha statue. The government claimed that the appearance of the extra finger was a signal of karmic support for the government.  Of course, the very religious Buddhist populace was enthralled with this, and many fell for this ruse.  As it turns out, the finger was no miracle at all.  It was added by a government worker. This was done with the intention of distracting the people from the reality of the government.  The man who was tasked with adding the extra digit admitted his deception.  Needless to say, he is no longer alive, killed by the government for betraying the deception.  (Notice the burmese 1989 in the left corner of the poster. That’s five months after the uprising.) Stories like this are the difference between a good guide and a GREAT one.

Another cool religious structure on the hill is Umin Thounzeh, a cave temple containing 43 seated and two standing Buddha images arranged in a semi-circular shrine, with a backdrop of sparkling glasswork.

The statues offer a great photo opportunity.  We got lucky.  Very few people were there, and the ones that were there left quickly, giving us the whole place to ourselves.  That’s when you get the cool photos.

Our next destination:  Amarapura and the famous U Bein Bridge.