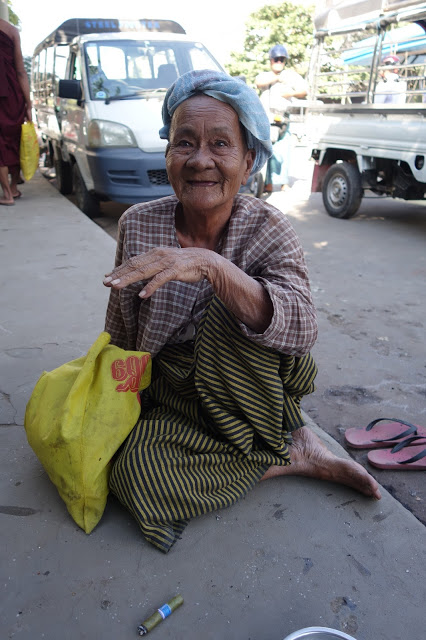 My Trip to Burma: Lunch in Mandalay, then a boat ride to Mingun.

Our second day in Mandalay has been jam-packed.  This morning we saw all the different craftspeople in Mandalay – gold leaf makers, woodworkers, bronze workers and marble makers.  Then, a stroll down Mandalay Hill, a visit to the world’s biggest book, and a stop at an amazing monastery.  All that activity makes one pretty hungry.  Time to dine at Shan Ma Ma.

I had read about this place in one of my guide books.  Very authentic Burmese cuisine, cooked outside and then set up, buffet style.  You point to what you want, and they load it on.  We decided to treat our guide and driver.

Lots of choices.  Yes, those are pig intestines in the back there.  And yes, Mark did order them.  Eww.

There’s me and Marn, stuffing our faces.  Total cost of lunch for the four of us:  $13.  Amazing.

I had read about the ice cream parlor Nylon.  I had our guide and driver take us there for post-lunch dessert.

Me, Marn, and the driver Mr. Aung each got a dish of ice-cream. I read that they made great shakes, too.  So I also got a banana shake.

Mark got this drink called faluda.

This woman, who was smoking a cheroot, was asking for money.  I asked if I could take her photo, and gave her some money, of course.

After lunch, we headed to the jetty and set sail for Mingun.  The highlight of this place is the Mingun Paya.  If it weren’t for this, I’m not sure how many visitors this city would get.

This little map of Mingun shows the major highlights of the city.  We started, of course, with the Mingun Pagoda.

First, we boarded the ferry to cross the Ayeyarwaddy.  It was great.  We had our own private ferry.

The ferry ride was great.  We passed a lot of other boats heading to Mingun.  On a nearby boat, we spotted some monks.  I went to take photos of them.  They apparently had the same idea.

That’s Mingun, in the distance.

As we pulled up to the shore, we spotted some locals kicking around a ball.  Before we knew it, we had arrived at the Mingun pagoda.

The pagoda has an interesting history. King Bodawpaya was one of the most expansionist and militarily daring rulers in Burmese history.  The Mingun Paya that Bodawpaya built on the banks of the Ayeyarwady at Mingun was intended to match, in scale, his prowess as an empire builder.  It was commissioned in 1790 to house a tooth of the Buddha. It was constructed by slaves whom the king supervised personally while living on an island nearby.  The upheavals of the early 19thcentury, however, led to a shortage of funds and labor that prevented the project from ever being completed.

If it had been completed, the stupa would have risen higher than the Great Pyramid of Giza in Egypt. (The project was originally intended to reach a final height of 150 meters).  By the time the king died (29 years later), all that had been completed was the bottom portion. Basically, you’ve got the world’s largest pile of bricks, on top of a huge terrace.  A massive earthquake in 1839 reduced the upper portions to rubble and left huge cracks in the facades.  Nevertheless, it’s still quite an astonishing sight, especially when first glimpsed from the Ayeyarwady River.

The shrine inside the main entrance is nothing amazing.  Climbing to the top and surveying the view: that’s what you really want to do.  An earthquake in 2012 caused the pathway heading up to the pagoda closed to visitors, however, you can still climb up, despite the warning signs.

In fact, if I see a sign that says you shouldn’t do something, I tend to do it anyway.  You can’t wear shoes, so be prepared to try to get up there barefoot.

It was a steep climb, but I was not to be deterred.

If you do go up to the top, watch out for the huge cracks created by the earthquake, like this one. You’re literally climbing on an earthquake-damaged pile of bricks.  It’s crazy.

The view from the top is definitely worth it.  Here we are, at the summit.

One very cool thing you can see from the summit is the Hsinbyume Pagoda.  In a few minutes, we’ll be at the top of that pagoda, looking back over here!

Note: on the climb up the pagoda from the river, you pass a pair of chinthe – the half lion/half dragon leogryphs that originally were intended to guard the giant structure.  They are almost entirely ruined, but you can still get a vague idea of their shape.  You saw good examples of the chinthes at the bottom entrance of Mandalay Hill.  If you thought they were big, you have to see this one!  Keep in mind, this is just the bottom half of one of them.  It’s enormous! This round rock on the ground?  It’s the eyeball of the ruined chinthe!

I saw this sad looking dog at the pagoda.  Her eyes were cloudy.  I went to pat her, and she got pretty startled.  I realized she was blind.  She got very nervous.  I realize now that I could have gotten bitten.  But she ended up being pretty trusting after a few minutes.

There were two other cute dogs at the pagoda.

Besides the world’s larges pile of bricks, Mingun also boasts the one of the world’s largest functioning bells, just north of the Mingun Pagoda.  This, too, was commissioned by King Bodawpaya, to whom size obviously meant everything.  It weighs 90 tons and is 5 meters wide at the base, and had to be floated into position via a specially built canal.

Of course, I did what all tourists do:  first I rang the bell.

Then, you crawl inside, and then have someone clang the bell.  Yes, I did it, too.  C’mon.  You gotta. That’s the apex of the bell, inside.

While inside, I saw these sisters crouching down, wondering whether to come inside or not.  I waved them in.  Then I took this nice, colorful photo of them.

Again, everyone was so friendly.  I took this picture of a proud dad with his kid, and he then took  a picture of me and Mark.

Our final destination on Mingun,just north of the Mingun Bell, is the handsomely whitewashed Hsinbyume Paya. It was built in 1816 by Bagyidaw, king Bodawpaya’s grandson.  The wavy concentric terraces below the stupa is said to represent Mount Sumeru, the mountain at the center of the Buddhist cosmos, and the seas that surround it.  There are seven such “layers” that encircle the sacred peak. You will be rewarded with a great view of the Mingun area if you walk up past all of them.  Which we did, of course.     First, we did a 360 tour on the ground level.  The wavy architecture was definitely unique.

The climb to the top was difficult.  The steps are deceivingly steep.  The lower levels aren’t too bad, but it gets steeper as you climb.

I think this picture better conveys how steep the incline is.

There were lots of kids hanging around the pagoda that day. I tried getting photos of them, but they were shy and started playing hard to get.

This was an unexpectedly cool picture.  I was trying to take a picture of how steep the steps were, as we approached the summit.  A second before I snapped the photo, a kid who was hiding up there leaped out.

Finally reached the summit.  The terrace up here was pretty narrow.  Kind of treacherous.

Here’s the view of the Mingun Pagoda from here.   A few minutes ago, we were on the Mingun summit, looking over to here.  Pretty cool.

At the summit were some shrines, like this one, with incense.

After enjoying the view and strolling around the narrow terrace at the top, we headed back down. On the way back to the jetty, we passed this place, the Mingun Buddhist Home for the Aged.

The boat ride back was timed so that we could experience sunset on the Ayeyarwaddy.  I took these pics from the boat.  A nice way to end our sightseeing.

Tonight, we’re going to see the famous Moustache Brothers perform their show.  This deserves its own blogpost.