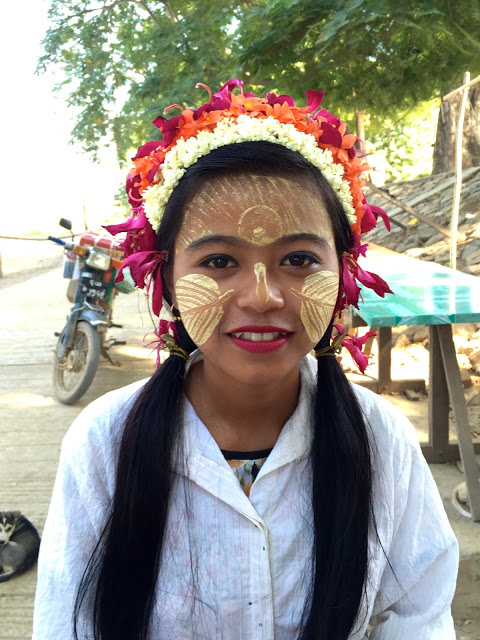 My trip to Burma: Exploring the former capital, Inwa, by horse cart.

It was tough saying goodbye to beautiful Inle Lake, but we were excited about our next stop, Mandalay.  The flight to Mandalay was very short.  Barely 35 minutes, which was a pleasure. We arrived at the airport and met our tall, slender guide, Marn.   He took our bags and led us to the car where we met our driver, Mr. Aung.  Instantly, I could hear that Marn spoke English better than any of our previous guides.  He laid out our itinerary:  We were going to Inwa first, where we would see the sites by horse cart, then onto Sagaing, and then finish the day in the former capital, Amarapura, where we would stroll along the famous U Bein Bridge to watch the sun set.  Sounded pretty good to me.

The three cities we were going to visit – Inwa (also known as Ava), Sagaing, and Amarapura – have an interesting history.  All three were former capitals of Burma (although Sagaing was a capital for only four years), and all three are tethered together by the mighty Ayeyarwaddy River.

After a brief drive, we were in ancient city of Inwa.  It’s a sleepy, semi-rural village, and one of the most enchantingly beautiful parts of the Mandalay area.  Originally known as Ava (that’s what the British called it), it was the capital of Burma, not just once, but four times!  For over 300 years total, more than any other city.  You’d never guess this, seeing the place today.

We parked the car and headed down some steps, where we were to catch a ferry.  The city is encircled by a moat, and you need a ferry to take you across the moat.

As usual, there were dogs everywhere.

This one was pretty cute.   Like most of the female dogs we saw, she was nursing pups.  I caught her taking a little break from the pups, but two pups soon rejoined her.

There were a bunch of kids at the ferry site.  The thanaka on their face had been applied in an interesting leaf pattern.

They were being nice to the dogs nearby, giving them food.  I saw many acts of kindness toward the cats and dogs in Burma.

This is the same girl in the photos above.  I just can’t get over how pretty she is.  The leaf pattern of the thanaka, and the way her lipstick matches one of the colors in the garland on her head.  She was happy to let me take her picture.

It was a small boat.  You can see, in the photo above, that the moat isn’t very wide.  It took all of two minutes to get across.

We were taken around by horse-drawn cart, which is charming in and of itself, but touristy.  Drivers typically ask for 10000 kyat (about $8) for a two hour tour, which covers a set route, usually stopping at the big sites: Nanmyin, Shwedagon Paya, and Bagaya Kyaung, and Maha Aungmye Bonzan.  We took a bit of a different route.

Our first stop was Bagaya Kyaung, Inwa’s most memorable site. It’s a truly captivating teak monastery built in 1834.  It still functions as a place of worship, residence and study.

Here’s a monk let going up the stairs to the main entrance, so he can study.

The intricately carved woodwork is impressive.

Peacocks and lotus flowers seem to be a recurrent theme here in Burma.

The dimly lit main hall (above) is pretty nice.  The teaching hall is nearby.

We saw some students studying.

And some students, um…. not studying.

The posters on the wall of the classroom were in both English and Burmese.

More lotuses and peacocks. These were on columns inside the monastery, as opposed to the ones above, which were outside.

You can add this lizard to the list of animals I saw on this trip.

We popped by another little bunch of pagodas, the Yadana Hsimee Pagoda Complex.  There was nothing in my guidebook about the place, and nothing really much online about it.

All I could find was that this group of pagodas is in ruins, a result of the 1839 earthquake, and that this Buddha, which was probably considered very prominent in its day, is all but forgotten now.

This little dog turned the opening of one of the pagodas into a cozy little doghouse.

A famous site in Inwa is Nanmyin, also known as the Leaning Tower of Inwa.   It’s the only surviving structure from King Bagyidaw’s palace.  The tilt is a result of the 1839 earthquake which eventually resulted in Inwa finally losing its status as capital forever.  It’s possible to climb it, for great views, however, it was closed.  Our guide and driver took us out to a field where we could get a good view of it, so we could at least have a photo.

Next on the tour was a visit to the Maha Aungmye Bonzan.  Designed in the style of a teak monastery, this brick and stucco structure is one of the few survivors of the Ava era. It dates from the reign of King Bagyidaw (1819-1837), who moved the capital back here from Amarapura in 1824.  The building is located on a slight rise.  This is the entrance.  It has a Downton Abbey-ish look to it, from a distance. The stucco is slowly turning to powder and breaking from the brick walls.

Inside you can find your usual Buddha images.  The coolest thing inside, however, were the maze-like corridors.  They make for great photos.

As  we were walking around, we saw this cute kid poking his head up through one of the openings on the second level.  I didn’t realize that he was actually scaling the wall until I got down to the ground level.  Crazy daredevil!

We asked Marn to join us, and he humbly accepted.  I mentioned to Marn that I was a great admirer of Aung San Suu Kyi and questioned him about how he felt the country was doing since the election.  As it turns out, he is a huge supporter of the NLD.  As a guide, he is expected to remain neutral when it comes to potentially hot-button or controversial issues, but once he saw that I was a sympathetic ear, he had no  qualms giving me the Burmese perspective, which is exactly what I was looking for.

As it turns out, his older brother spent 15  years in prison for being an activist.  Out of prison now, he ran for parliament in the recent election on the NLD ticket (of course) and was victorious, and is set to assume the seat when the new session begins.

During lunch, a very cute little orange boy stopped by the table.  This kitty was super-adorable, and very comfortable around people.    Look at that face!

I had, in my bag, a few packets of dry cat food with me (yes, I actually travel with cat food, for this very reason), and poured some on the ground for him.  He was quickly joined by a friend. Lunch was really illuminating.  We got to know Marn pretty well, and he told us some fascinating stuff.  For example: in Burma, they drive on the right side of the road, just like we do here in the U.S. However, the steering wheel is on the right side of the vehicle! As you can imagine, passing on the left now becomes extremely dangerous. You’d have to pull relatively far into the left lane to see if it’s safe to pass.  Fortunately, the drivers have adapted to this very well and they use their horn not so much to signal drivers up ahead to move out of the way, but more as a way of communicating your intention to pass.  When a driver up ahead turns on his left turn signal, it doesn’t mean that the driver intends to turn left.  Our driver beeps, to say, “I’d like to pass you on the left”, and the driver up ahead turns on his left turn signal, to say,”I’ll let you”.    Well, the reason the driver’s seat is on the right side of the vehicle is because the previous head of the military was so opposed to anything “leftist” that he even moved the driver seat to the right side of the vehicle!  Marn said that Aung San Suu Kyi has decreed that any new cars imported into Burma now must have the driver’s side on the left.  No new right-sided additions to the country.     The other thing he said was that we should not be timid or embarrassed about asking people if we can take their photo.  No one would ever say no.  “The world has been ignoring us for 50 years”, he said.  “We’re still amazed that people are now interested in us, and we think it’s great. Don’t worry about taking photos.”   Like everyone in Burma now, Marn is very optimistic about the future, and is philosophical about the military government.  He hates what they’ve done to the population, but he knows that the new government and old government are going to have to work together to achieve their goals.  He then came up with a great metaphor.  “I think of the military as  water in a well or in a lake”, he said.  “We should be able to go to it when we need it.  But if water overflows and spills out and comes to you when you don’t want it or need it, it can be bad. It can be dangerous.  The Burmese people should be able to get water when they need it.”

I could have sat there and chatted over lunch all day.  But we had more stuff to see, so off we went.  At the exit of the restaurant, I was ambushed by some young girls trying to sell me merchandise.  I actually did like one of the items she had.  It was a triangular gong, which she’s holding in her right hand.  I ended up getting it for $5, which was a terrific deal.  I also stopped to pat a really sweet little dog.

Our next destination was Sagaing.  To get there, we need to cross the Ayeyarwady River.  The old Inwa bridge, with 16 spans and two decks, one for road traffic, one for rail traffic, used to be the only route across the Ayeyarwady from Mandalay when it was built by the British in 1934. In 1942, they sabotaged it by destroying two of the spans to delay the Japanese advance.  Fourteen years later, the bridge was repaired and was the main link between the two banks, until 2008, when the three-span Ayeyarwady Bridge, with its four-lane highway, was built next to the old bridge.   That’s the old Inwa bridge, below.  We took the new bridge.

This is the new bridge.  You can see, from the passenger window below, a view of the old bridge.