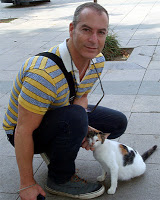 After many months of being very busy practicing veterinary medicine, in which it seemed that every cat in the city was sick and they all wanted to come to my hospital, I finally got to take a much needed vacation.   The destination:  Istanbul, formerly Constantinople, formerly Byzantium, the city that straddles two continents, the city where east meets west.  Insert any cliché you like. I’m headed to Turkey, and I am psyched. Turkish airlines turns out to be surprisingly impressive. They do things a bit differently, though.  They do not board by rows.    Everyone lines up, and it doesn’t matter if you’re in row 8 or row 48.  The announcer says “it’s boarding time”, and everyone swarms the entry gate and descends upon the aircraft en masse.  It was bizarre.   The cabin of the plane is very attractive, with a turquoise décor that certainly beats the drab beige and taupe of its competitors.

I shouldn’t have been surprised. The word “turquoise” is derived from an old French word for “Turkish”, because the mineral was first brought to Europe from Turkey.  See the amazing tidbits you learn from reading my blog?  But I digress. The seats, while horribly narrow (as expected for economy class) come with an individual movie screen embedded in the back of the seat in front of you, and you have a choice of about 15 movies, some of which are fairly current.  I watched “Water for Elephants” , worried that the movie wouldn’t do justice to the book, which was fantastic. (It did.)  The food served on the flight was shockingly good.  The flight attendant handed out a menu, informing us that we all were getting prawn salad and green bean salad for starters, and then have a choice of grilled chicken breast with rosemary potatoes, or rigatoni with mozzarella.  Each meal came with a hard roll, piece of cheese, and cake for dessert.   I went for the chicken.  Mark (my traveling companion) chose the pasta. I regretted my choice after snagging a tube of his rigatoni.  It was excellent.  My chicken breast was pretty bland, until I discovered, buried in my silverware packet, a little envelope of tuz (salt) and biber (pepper).  After tuzzing and bibering my chicken, it was much better.  What really impressed me was the plates and silverware!  It wasn’t plasticware.  It was actual pretty decent quality silverware.  And the plates were porcelain!  My chicken breast arrived in a white porcelain dish that retails for about  17.99 at Crate and Barrel.  I briefly considered jamming in into my carry-on under my seat, but the thought of bits of pasta sauce smeared on my guidebooks led me to reconsider.   This was a red-eye flight.  Take off was at 11:00 pm. This made the dinner a bit odd, in that it was served at about 1:00 a.m.  But hey, I’m a New Yorker; I’m used to eating at weird hours like this.  I actually don’t mind red-eye flights to Europe.  In fact, I prefer them.  If you leave in the morning, you arrive in Europe in the morning, and you’re exhausted.  If you sleep when you arrive, or soon after in the day time, it screws up your internal clock pretty badly.  Not so much with the red-eye.  On this flight, ten hours later, we’d arrive in Istanbul. Then, you add 7 hours, and presto: it’s 4:00 p.m. in Turkey. Fine with me.  You arrive after a sleepless flight, force yourself to stay awake until bedtime, then sleep like a dead man and wake up the next day with your body clock re-set.  Mimimal jet lag.   I don’t know about you, but I can’t sleep on an airplane, for a variety of reasons.  The seats are too narrow.  The air temperature is too warm.  An overhead light three seats away is illuminating my face. Lots of reasons.  On this particular flight, I slept like a baby.  In other words, I slept for an hour, then woke up and cried. Then slept for an hour.  Then woke up and cried.  Okay… I’m exaggerating a bit.  Yes, I slept for an hour at a time, but I didn’t wake up crying.  I didn’t have to.  The baby two rows away was doing enough for both of us.  His timing was uncanny.  He’d wait just until I managed to actually doze off, and then the eardrum-shattering, nails-on-a-chalkboard wailing would begin.  I was waiting for the flight-attendant to escort the kid to the special children’s section, conveniently located on the wing, but alas, no such luck.   Our flight arrived on time, at exactly 3:40 pm.  Since we only had carry-ons, we zoomed to the visa office, bought our visas ($20), and then zipped through passport control, and then managed to catch the 4:00 shuttle bus to Taksim Square.  How’s that for efficient?  Found our hotel (with a Google map and a little help from some natives) and got settled in.  After unpacking and getting our bearings, we hit the street – Istiklal Caddesi, the main pedestrian thoroughfare.  It was a mob scene, crammed with lots of natives and locals alike.

Lots of familiar stores (Gap, Zara’s, Bennetton) and lots of food and candy stores.  Had a great, really authentic meal at a buffet restaurant. I suspected it would be good, given the huge line of locals spilling out the door.  Grabbed an enormous amount of food, and two drinks, all for $20.  That’s total, not per person.

While out strolling, I came across a really nice cat on a side street (lots of fish restaurants, so no surprises there), and when we finally got back to the hotel to call it an early night, there were a few strays visible in the distance.

I called one over, and two minutes later I had a small group of cats gathered around me.

After being awake for 23 straight hours, exhaustion was finally settling in.  Time to call it a night.