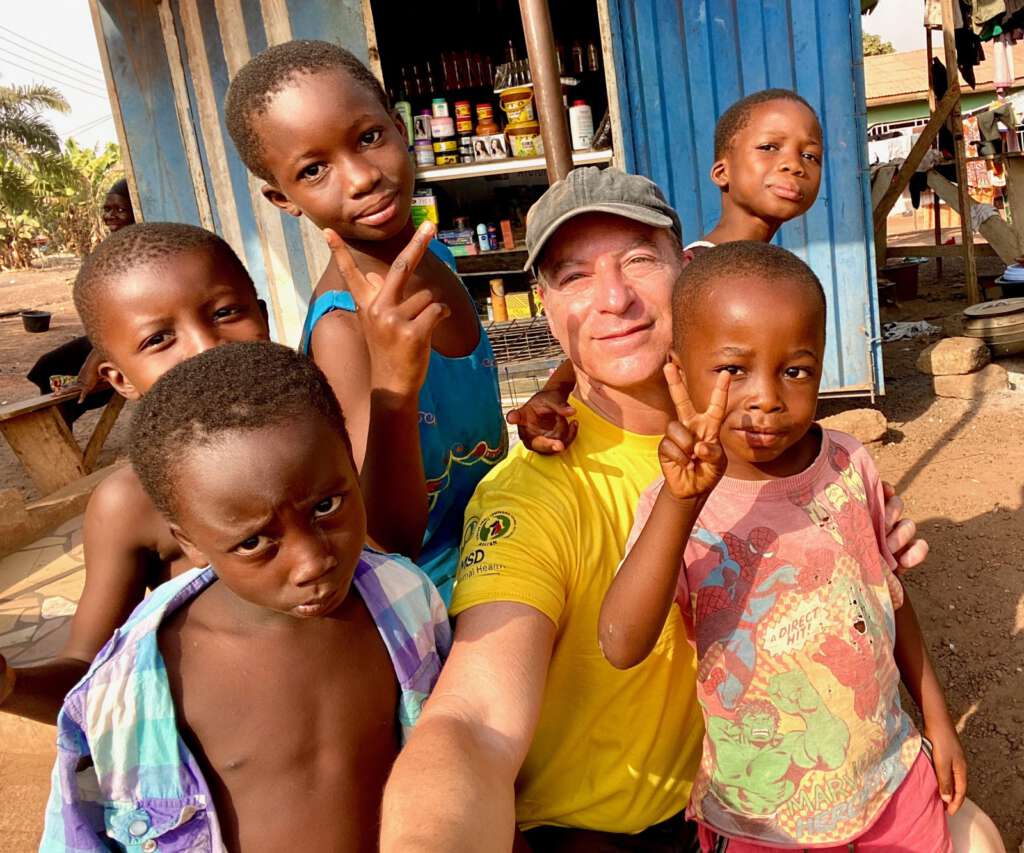 After a restless night trying to sleep (jet lag plus excitement), the alarm went off at 5:10 a.m.  I shaved, showered, put on my Mission Rabies t-shirt, scarfed down breakfast with the rest of the gang, were given our special phones with the Mission Rabies app, and then off we went, to the Health Center (our base camp) where all of our supplies were waiting for us.

At the base camp, there was a big banner announcing the mission.  I saw a few of these banners around town as well.

We familiarized ourselves with the supply room, where all of the vaccines, syringes, needles, ice packs, pamphlets, coolers, and first aid kits were stored.

We were each given a big shopping bag, a first aid kit, and a cooler.   Megaphones, too, for announcing to the community that we were offering free rabies vaccinations.  We put ice packs in the cooler, and then loaded it up with vials of rabies vaccine. We loaded our bags with syringes and needles, a marker to paint the head of vaccinated dogs, and two booklets of vaccine certificates.

We also made sure that our vaccine booklets were properly dated, signed, and stamped before we headed out.  Every dog owner received a vaccine certificate as proof of vaccination, so they could have a record of when their dog was next due for the vaccine.

We also had our own personal backpacks. My backpack had sunscreen, a hand towel, bug spray, some snacks (granola bars), a phone charger, my selfie stick, and most importantly, two 1.5 liter bottles of water.  After having kidney stone incidents in Burma and Bangkok, I was determined to stay ridiculously hydrated and not have any incidents, especially given that the weather here is just like those two other places: outrageously hot (98 degrees) and horribly humid.

I met my other teammates this morning.  Our leader is a 60-year old retired Ghanaian veterinarian named Adusei. He worked as a government veterinarian, and he recently retired because 60 is the mandatory retirement age for government workers.  We also have a driver named Moses. Also joining us is a young Ghanaian veterinarian named Charlotte. These folks were the core of our team. The fifth member of the team was a Community Health Officer (CHO).  This person differed daily, depending on which region we serviced that day. Sometimes the CHO was already at our base camp before we headed out into the field. Most of the time, we had to stop and pick up the CHO as we drove nearer to the area we would be servicing that day.

On this day, we stopped to pick up our CHO, and then headed to the area we were to service for the day.   Adusei and the CHO both took turns on the megaphone, announcing that we were conducting a vaccination clinic in the area.

Here is a brief rundown of the methods of vaccination we conducted.  We had “static clinics”, in which we set up a table at a particular spot, and then stayed there while local residents came to us with their dogs.   We also did door-to-door vaccinations, in which we drove or walked through a neighborhood and knocked on doors, asking if they had any dogs that needed vaccination.  The third method was a hybrid of the two, called “roaming static clinics”, where we drove to an area, set up shop, vaccinated dogs that people brought to us, and then packed it all up, drove to another area, and set up another temporary static clinic.  The goal was always the same: vaccinate as many dogs as possible, with 70% being the target number.

We arrived at the site of our static clinic.  We borrowed a table and some chairs from the human hospital next door, and set things up.

We seemed to be in the middle of nowhere, and I couldn’t imagine people showing up, but soon enough, they came streaming over.

There were three veterinarians on our team, so all of us were authorized to vaccinate.

After vaccination, we mark the dog’s head with a red marker.

This lasts for a few days, and lets other volunteers who might encounter the dog a few days later know that this dog has already been vaccinated.

I took a few pics of kids with their dogs.

Traffic at the static clinic eventually slowed down, so we packed up our stuff and went door-to-door.   The homes that we encountered varied dramatically. Some were basically farms, with lots of goats, chickens and dogs running around.  Others were more like the suburbs, with relatively modern-looking homes.

In every case, though, the landscape was the same: lots of rocks, pebbles, and dust.

Sometimes, we’d encounter someone with dogs while driving.  They had heard our announcement that we were offering vaccinations and were on their way to the clinic we set up, and we would intercept them.

Often when we would be walking around, we would encounter people who recognized us from our bright yellow Mission Rabies t-shirts, and they would tell us which homes in the area had dogs.  This was pretty helpful. This woman directed us to an area with a lot of dogs.

She did this while casually carrying a huge 50 kg sack on her head.

Finally, we completed our area and we started heading back.  I had my lunch with me (Mission Rabies doled out a boxed lunch every morning to the volunteers, for us to take with us on the road.  I had eaten mine early, around 11:30, and I was getting a little hungry. We passed a market, and Adusei asked if I wanted to get anything.  I had no idea what to get. I asked if there was any kind of bakery. They said that one of the stalls was selling bread. We went over just in time to see them pulling these big rectangular loaves from the oven.

Although it looked like some plain ol’ loaf of white bread, it was warm, it smelled great, and it tasted amazing.  It was really buttery. Charlotte informed me that they call this “butter bread”. Perfect name. I’m drooling just typing this.

As we were driving back, we passed another group at their static point, and we stopped and chatted.  There were a lot of kids around, and I sensed some great photo opportunities, so I started snapping away.

It wasn’t just the kids who wanted in on the act. Charlotte and Adusei got in on the act, as did Leigh, Ingrid, and Henry from the other group.  I guess everyone likes being photographed.

We headed back to base camp feeling very accomplished.  We all met up, chatted, traded stories about our first day, unloaded our supply bags, restocked them with new stuff for tomorrow, and of course, took a group photo.

Recently here in this region, a 12-year old boy died of rabies after being bitten by a dog. There is still much work to be done here, and in Asia as well. Our Mission Rabies work is helping to reduce these awful incidents. To continue this work requires financial resources, the vast majority of which come from individual donations. If you’ve enjoy my postings and support the work I’ve been doing, I hope you’ll take a moment to make a donation to help support my mission in Ghana and future missions.

To do this type of work is expensive and requires many resources.  If you support the work that I am doing with this amazing organization, I ask that you make a donation to the cause.  Every dollar helps.