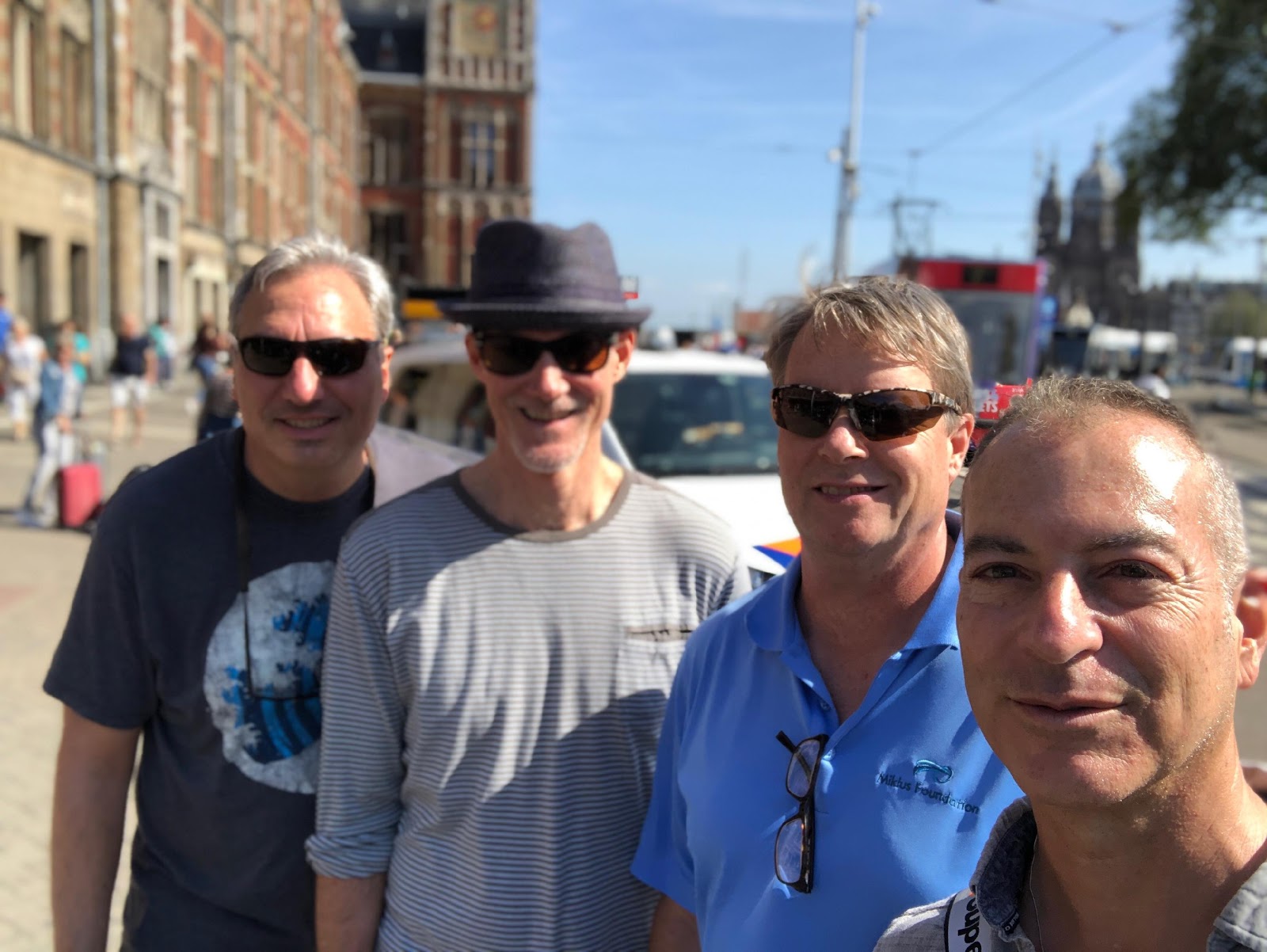 Men Of The Woods in Amsterdam Pt.2 – Arrivals

I woke up early, got dressed, and started walking toward Central Station.  Plumeau and Rosen were due to arrive at Schipol Airport at 8:30 a.m.  I grabbed the 7:30 train, got to the airport at 8:00, and looked at the arrivals board to see which arrival hall they would be coming through.  I knew they had to go through passport control, but Amsterdam is very efficient and it takes just a few minutes for that.  I waited, and waited, and was getting a bit restless when I finally got a WhatsApp message from Plumeau telling me where they were.  Of course, it wasn’t the gate that was written on the board. Same thing happened with Robb. Anyway, I found them, and we purchased train tickets back to Central Station, and then walked to my apartment. The last time Plumeau was in Amsterdam was about 35 years ago.  This was Rosen’s first time to Europe, period.  There was a good feeling of excitement and anticipation in the air.

On the train, we all lamented about Barry’s last minute cancellation.  Chaz was supposed to arrive that morning, initially, however, his flight was re-routed through Chicago due to weather issues, so Chaz would be arriving later that afternoon.

The guys put down their luggage and got settled in. I gave them a tour of the apartment, including the newly christened Opium Den – the little upstairs bedroom that I decorated with a very sixties, hippie aesthetic.

The weather was great, and even though they had been traveling for many hours, the plan was to stay awake until bedtime, sleep like corpses, and start the next day rested and adjusted to the new time zone.  We wasted no time hitting the streets.  I took the guys on a little walking tour of the city while we waited for Chaz.

First stop was Dam Square, of course, the heart of the centrum.  We admired the Royal Palace, gazed at the New Church, and then moseyed across the cobblestones and street to the Monument of the Dam.

We walked up the touristy Warmoesstraat, then down the restaurant-lined Zeedijk, and landed at Newmarket.  The Waag (the old weighing station) has been renovated into a lovely restaurant, and is a noteworthy piece of architecture.

We then headed toward the Waterlooplein, past the famous flea market, and then toward the Amstel River, where we were treated to a lovely view of the houses that line the water.

Plumeau had to pee, and was intrigued when I told him that progressive, well-designed Amsterdam is dotted with very convenient outdoor urinals.  I knew that there was one near the Old Church, and getting there would take us through the Red Light District.  I was saving a Red Light stroll for another night, but when duty calls, you have to obey.  As we were heading toward the church, a powerful stench hit my nostrils. It smelled like the porta-potty at a Slayer concert. There must be a urinal nearby, I said to Mike.  Sure enough, we had just passed one.  Mike then officially christened the city.

We continued to walk around the eastern part of the centrum, strolling down a really lovely canal street.  There was a bench overlooking the canal, and we stopped and admired the homes and enjoyed the serenity.

We went back to the apartment so Chaz could drop off his luggage and freshen up a bit after a brutal travel odyssey, from New Mexico to Chicago to Frankfurt to Amsterdam.  As if this itinerary wasn’t bad enough, Chaz informed us that a few days before he left New Mexico, he had hurt his right knee, and it really wasn’t getting any better.  In fact, it had worsened over the past few days.  Amsterdam is a walking/biking city, and it was hard to predict how this knee injury would affect our group sightseeing activities. My apartment being a fourth floor walk-up didn’t help matters.

Fatigue was definitely settling in amongst my comrades, and it was decided that a short nap would be in order, with the key word being short.  Everyone was still in agreement that staying up until bedtime was the key to defeating jet lag.  So everyone sacked out, and I told Alexa to set a timer for 45 minutes.

The nap did the trick.  We were re-energized now, and off we went, this time in the opposite direction, toward the major canals (SIngel, Herengracht, Keizersgracht, and Prinsengracht), admiring the views from the many bridges we crossed, chatting and laughing all the while.

I was really looking forward to dinner, as I had made a reservation at Kantjil & de Tijger, an excellent Indonesian restaurant just down the block from my apartment.  Indonesia was a former Dutch colony, and Indo food is super-popular (and very well done) in Amsterdam.  We were seated quickly and selected the classic “rijstafel” (rice table), where an endless array of dishes are brought to the table, quickly filling up every square inch of space, each dish looking tastier than the last.  Add to that a pitcher of beer, and then another, and presto: an incredible meal, and arguably, the best meal of the entire trip.

We walked back home, all of us feeling as if we would explode at any moment.  As we passed one of several coffeeshops on my street, Chaz and Rosen eyed one in particular, and we were soon inside.  We were all seized with a simultaneous “when in Rome” moment, prompting Plumeau to buy a joint and Chaz and Rosen to purchase some edibles.

Sleeping arrangements were quickly decided.  Chaz would take the Opium Den, the little hidden bedroom upstairs formerly referred to as The Anne Frank room.  I had two inflatable mattresses ready for the others.  Plumeau said the couch was fine, even though I think it’s a bit too narrow to sleep on. Rosen happily took one of the inflatable mattresses.   We saved the joint for an upcoming day, however, in an inexplicable move, Chaz decided to eat half of a weed brownie about a half hour before going to bed.  He had been awake for at least 24 hours and was desperately in need of sleep.  Instead of the brownie knocking him out, it caused him to wake up at 2:00 a.m., stoned out of his mind. The rest of us slept like Michael Jackson on Propofol.