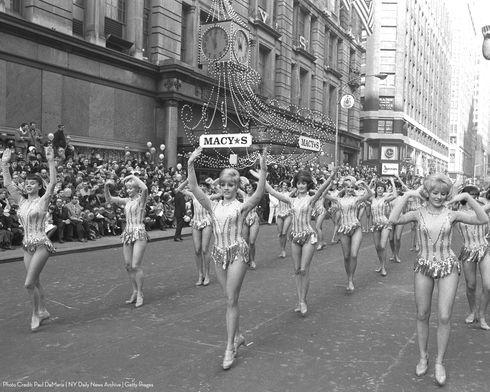 Nostalgia-Vu – A “reliving reminiscence;” A feeling you get when you return to a personal memory from your childhood triggered by taking part in it present-day. A great example is going to your high school reunion. It’s a remembrance from years past, while also taking part in the present-day version.

I live in New York City, fairly close to Macy’s.  That part of the city, Herald Square, is always insanely crowded, and just walking through the area is enough to induce major stress.

I clock more miles moving laterally rather than forward.

Me, while walking in NYC

It’s shopping season now, and the crowds are worse.  Mark needed to buy some gifts for his coworkers. Macy’s has everything, and the chocolate department at Macy’s afforded him a one-stop-shopping opportunity to get all of his gift shopping done, so a few days ago we went there. I have to say, they had the store decorated pretty nicely, with great lights overhead, and a very colorful Louis Vuitton display window inside.

Thankfully, most of the shoppers were on the main floors, pawing through watches, perfumes, jewelry and clothing.  The chocolate department, on the sixth floor, was quiet and welcoming, and with no jostling from other shoppers, it was actually pleasant.

Trying to partake in any holiday activities in New York can be a chore, because there are always a million other people trying to do the same thing as you, at the same time as you.  Forget about ever seeing the ball drop in Times Square, or the fireworks on the 4th of July.

The lighting of the Christmas tree in Rockefeller Center?  Good luck with that.

For those kinds of events, unless you plan things days in advance and commit to spending your entire day in line with the other cattle, it ain’t happening.

I do love the little shopping villages that appear every year in Bryant Park and Union Square for the holidays, but weaving through all of the shoppers takes much of the fun out of it, especially in Union Square, where the lanes are ridiculously narrow considering the number of people pouring through there.

I visited the Union Square Holiday Shops yesterday.  Going on a Monday at 1:30 in the afternoon was a good move.  There were people, but not too many, and I was actually able to look at the items on offer without it being the usual obstacle course.

The Macy’s Thanksgiving Day Parade falls in the above category of events, obviously.  It’s a huge spectacle, and even though I live just a couple of blocks from Macy’s, unless I plan on camping out on the street overnight, it would probably be easier for me to donate a kidney than to get a decent spot along the parade route. (Watch in Comfort)

Most years, I’m out of town during Thanksgiving just like everyone else.  This year, Mark and I are both in town with no Thanksgiving plans, oddly enough.  I never consider attending the parade, however, this year might be different.

Being retired has given me a new perspective on the city.  When I was employed, the streets just served as the conduit for me to get from point A (home) to point B (work).  My one weekday off was usually reserved for errands, leaving just the weekends for me to experience the city.  Now that I’m retired and have my days free, I spend a lot of the time walking around, and I’ve gotten reacquainted with the city, revisiting streets and neighborhoods I had encountered in the past, and discovering streets, alleys, and buildings I’d never seen, or maybe have seen but never noticed or appreciated.  The streets are no longer the means for me to get to my destination. The streets are the destination.

New York always has a very strong present, and this constantly threatens to obliterate the past.  However, on occasion I’ll stumble upon something that has managed to survive the many changes the city has undergone (for example, the faded old advertisements still on some buildings, or an old candy store that carries Pez or Choward’s violet mints), and I’m suddenly flooded with this feeling of reminiscence, a strange combination of déjà vu (I’ve been here or seen this before) and nostalgia (if I haven’t seen this or been here before, I wish that I had).  I call it nostalgia vu.

Nostalgia vu is beckoning me to the Thanksgiving Day Parade this year, and here’s why.

Like all kids growing up in Brooklyn, I was a television addict.

I had my favorite shows, like Wonderama (hosted by Bob McAllister, although actually I remember the guy who hosted before him, Sonny Fox; that’s how fucking old I am), and Captain Kangaroo, but my absolute favorite was The Soupy Sales Show.

Soupy was a comedian.  The show was in black and white, and it was basically a series of comedy skits and monologues, very similar in style and format to PeeWee’s Playhouse, with recurring characters like White Fang (his very mean dog, which was just a giant white paw that emerged from the corner of the screen), Black Tooth (his very nice dog, represented by a giant black paw, again offscreen), and Pookie, a lion, who hung out in a window behind him.

Soupy’s trademark was getting hit in the face with a pie.  I read that in his career, he had taken over 20,000 pies to the face.  These pies weren’t gently pushed into his face. They were thrown from offscreen, pretty hard, in his face, often multiple times in a row.  The skits were terrible. The puns were awful. The jokes were horrible. The show was crude, cheesy, corny, and very low-budget. And yet, you laughed your head off, because these skits often ended with a pie being blasted into Soupy’s face.

The show was broadcast like a big inside joke.  Soupy and his crew knew how cheesy it was, and they did little to hide it.  That was part of its charm. Some people may have heard of Soupy because of a famous stunt he pulled, where he told the kids at home watching the show to tiptoe into their parents’ bedroom and take those “funny green pieces of paper with pictures of U.S. Presidents” from their fathers’ wallets and mothers’ pocketbooks and mail them to him.  Well, in short order, lots of money started arriving in the mail. Soupy got into hot water (how’s that for a bad pun) with the TV station, and even though he said he’d donate the money to charity, he was suspended for two weeks. (Apparently, he did this stunt because he was pissed off at having to work; it was New Year’s Day.)

In spite of this, I was obsessed with Soupy Sales.  My parents found it amusing that I was soooo into this show. I’d be glued to the television. My dad would occasionally watch it with me, and even he would laugh at the pies in the face, although I think he was laughing at seeing me laugh more than he was laughing at the show.

Soupy made a novelty record, called “Do the Mouse” in 1965 or ‘66.  The Mouse was a dance, and it involved making a funny face. You put your hands up by your ears, pull your upper lip back to show your front teeth, and make a silly gnawing motion with your mouth.  I remember this as a kid pretty well.

One day, I was watching the show, and Soupy announced that he was going to be on a float in the Macy’s Thanksgiving Day Parade!  I told my dad about it. Well, on Thanksgiving Day, 1966, my dad surprised me and said, “Let’s go. We’re going to the parade!” We hopped on the subway and headed into the city.

As a little kid, New York City, Manhattan, “the city,” was a land of magic and mystery. My dad led the way, and soon, we were at the parade route. We stood right near the Macy’s awning on 34th Street, and my dad made sure I was near the curb, to get a good view.  I was mesmerized by everything – the giant balloons, the marching bands playing songs and tossing their batons in the air, and the fancy floats.  It was an exciting event, and I was enthralled.

I watched a bunch of floats come down the street, and then in the distance, I spotted it: the float with Soupy Sales on it.

I could see Soupy in the distance, waving at people on the streets.  He was waving to people on the right, and on the left, making sure no one felt left out.  I was on the left. The float got closer, and closer. Finally, it was just a few yards away.  I was looking up at Soupy from the curb. As soon as he looked in my general direction, I lifted up my hands to my ears, stuck my front teeth out, and did The Mouse at him.  He was waving at the crowd, but he saw me do The Mouse at him, and then… he did it back!! Yes, Soupy Sales did The Mouse right back at yours truly.  This wonderful moment remains a highlight of my childhood.

On second thought, I may not bother going to the parade this year after all.  I don’t think anything I see there can top the memory of that 1966 parade.