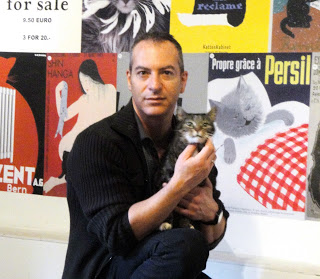 Holland.  The name conjures up windmills, tulips, and wooden shoes.

With laid-back friendly people, scores of museums, a multitude of restaurants serving top-notch international cuisine, “coffee shops” that feature marijuana on the menu, gay marriage, and legalized prostitution,  Amsterdam is undoubtedly Europe’s most progressive, hippest city.  Its beautiful canals have earned it the moniker “The Venice of the North”.

For the regular culture-vultures, no trip to Amsterdam is complete without a visit to the van Gogh Museum, the Anne Frank House, and the Rijksmuseum.  For those hooked on cat-culture ( like yours truly), you cannot visit Amsterdam without popping into Katten Kabinet, the only art museum in the world devoted solely to artwork depicting cats.

The ancient Egyptians domesticated the cat, appreciating their supreme suitability as household companions.  Soon afterward, artistic feline images began to appear, mainly as sculptures and paintings.  Cats are now as ubiquitous in the art world as they are in the physical world.  Certainly, artists appreciate the beauty and grace of the feline and feel compelled to try to capture this on the canvas. It is not an easy task.  As the writer (and cat lover) Theophile Gautier noted, “Painting cats is a question of genius.”  I suspect it goes beyond mere infatuation with their beauty. Artists often feel a kinship with cats; their individualism, their intensity, their introspection and independence of thought.  For many artists who consider themselves to be non-conformists, kinship with cats is a no-brainer. If nothing else, cats make good companions for those creative types who work alone in their studio.  “Nothing is so difficult to paint as the cat’s face. The lines are so delicate, the eyes so strange, the movements subject to such sudden  impulses, that one should be feline oneself to attempt to portray such a subject”, declared the French author Champfleury.  Perhaps Champfleury is taking things a bit far. I don’t think you need to be a cat yourself in order to successfully paint one, although it probably helps.

I arrived at Amsterdam’s Schipol airport on Friday morning.  After a quick train ride to Centraal Station, a ten minute walk to the hotel, and a few minutes to get settled…voom! I was off, map in hand, strolling toward the beautiful canal named Herengracht.   Every canal in Amsterdam is lined with lovely canal houses.  The most coveted, however, are the mansions clustered around the “Gouden Bocht”, the Golden Bend.  This curving stretch of Herengracht is where the wealthy merchants built their lavish homes in the 17th century.  It is here, at Herengracht 497, that you’ll come upon Katten Kabinet.

The museum was founded  in 1990 by Bob Meijer, in  commemoration of his red tomcat, John Pierpont Morgan (named after the American banker J.P. Morgan).

I entered the building and was immediately struck by the rich wood interior and the serene atmosphere.  After paying admission (a mere 5 euros), the friendly sales clerk directed me to the main storey upstairs where the gallery is housed.  Climbing the creaky stairs, my eyes quickly wandered upward, toward the many paintings, photos and posters that line the walls.

A quick left turn at the top of the landing lead me down a short foyer that was lined, floor-to-ceiling, with art depicting cats in product advertisements, concert announcements, and movie posters.  Returning to the landing at the top of the stairs, I found myself at facing the doorways that lead to the rest of the gallery.  The gallery consists of several rooms – a ballroom, complete with a striking crystal chandelier and wall appliqués, dating from around 1750; the music room with its impressive ceiling paintings, from 1870; the Mechelen room from 1886, entirely preserved  in its original condition, and the library, which houses an extensive collection of documents and books on cats.

The music room’s main feature was the piano situated  in the center.

A comfortable chair and a small fireplace mantel added additional sophistication to the room.  The walls were lined with paintings, the mantel was home to several small statues, and a glass display case in housed numerous trinkets and jewels, all with a feline theme.  What caught my attention most, however, was the litterbox in the corner of the room.  Where there’s a litter box, there’s at least one cat, and I continued my tour on high alert, trying to spot a real cat hiding amongst the inanimate ones.

The ballroom contained a lovely collection of feline-inspired paintings, prints, photos and sculptures.  On the wall to the left of the fireplace, I admired a framed collection of cat-containing covers from Harper’s magazine.

Directly in front of the fireplace was a unique type  of pinball machine. The ball, when hit, bounces back and forth between an array of evenly spaced white porcelain cats.

When a cat gets pinged by the ball, it vibrates, giving off a serene, Zen-like hum.  This was demonstrated via a continuously running video in the corner of the room; touching the actual pinball machine was not allowed.   The wall opposite the fireplace contained a collection of photos, most  notably one of Truman Capote  holding his beloved companion.

On to the Mechelen Room, where the light emanating from the chandelier and fireplace mantel gave the room a soft, warm glow.  On the east wall of the room was a small fireplace with a very large mirror above it.  Appearing to scurry up the right side of the mirror was a sculpture of a white and  orange kitten.

Paintings occupied every inch of wall space, while statues and sculptures lined the flat surfaces.   My eyes feasted on works by Picasso, Tarkhof, Foujita, Willette, Fini, Toulouse-Lautrec, and Rembrandt.  As I gazed at these works, I casually glanced under chairs and dressers, seeing if I could spy the resident feline, but alas, no luck.

Being a shopper at heart, I certainly noticed the small gift shop across from the ticket desk when I entered.  Having perused the museum’s rich collection, I headed back downstairs, preparing to part with a few euros in exchange for a memento of my visit.  The walls of the gift shop were lined with reproductions of many of the posters seen in the upstairs foyer and on the walls of the other rooms of the gallery.  It was here, at the end of my visit, where I finally encountered the mackerel-and-white female tabby who calls the museum home.

I never did catch her name, but she readily approached as I crouched down to greet her.  She made herself comfortable as I lifted her onto my leg, and she later followed me into the lobby where she sat on my lap for a few minutes before scurrying off.  As I headed back to my hotel, I passed one of Amsterdam’s many herring stands. I myself had no desire to try this staple of Dutch cuisine, but I couldn’t help thinking how much the little museum cat would have loved it.  Perhaps I’ll bring her some on my next visit.