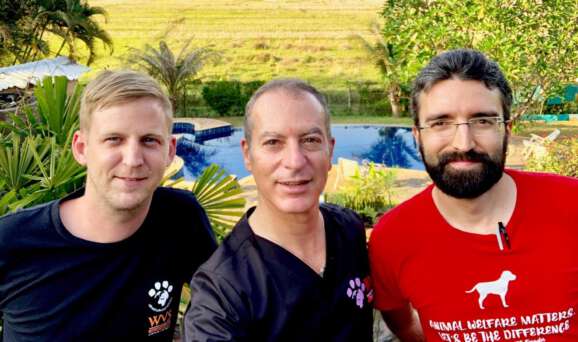 The next morning, after a great breakfast, Ian took me to the Centre, where I finally met Dr. Miglio.

He gave me a tour of the facility, including the clinic, the shelter, and the surgery area.

The clinic was pretty modern, with state of the art x-ray equipment.

Most of the animals in the clinic are brought there for obvious, visible problems, such as limping, lacerations, external tumors, eye problems, and skin infections.  It’s very different from my New York practice. In Chiang Mai, you won’t get people bringing in a dog or cat because it is drinking too much or losing weight. It’s a different kind of veterinary practice; it’s more of a type of community medicine.

Many of these animals aren’t owned by one person, per se.  They reside in a neighborhood and are known to the area residents who feed them and look after them. But no one really owns them, and their medical care is basic and minimal.

Dr. Miglio and his staff have really built a nice community practice that everyone knows about, and they provide excellent care and advice, often through community outreach programs.  I admire it so much.

I met some of the other doctors and staff and I watched them perform some canine surgeries.

My original intention was to get a refresher course in canine spay and neuter.  Being a cat practitioner, I hadn’t spayed or neutered a dog in about 18 years. I prefer cats, and I was okay with no longer doing surgery on dogs, but many of these humanitarian missions that I’m drawn to involve canine spay and neuter, and I would never volunteer for them unless I was very confident in my surgical abilities.  Unfortunately, my medical mishap delayed my arrival in Chiang Mai, preventing me from doing enough canine surgeries to feel proficient again. Instead, I would focus on what I do best: cats. The staff at the center knew of my feline expertise, and they were ready for me.

I performed a cat spay on that first day.

I thought it would be strange doing surgery again.  I hadn’t spayed or neutered a cat in a year and a half, since retiring.  Well, it came back to me in an instant, of course.  The difficult part, for me, was getting used to their surgical instruments. Back in New York, my technician Hiromi had been preparing my surgical packs for 14 years.  If any scissors or instruments became dull, she sent them off to be sharpened immediately.  I was very used to the feel of my instruments. These instruments felt very different. The most different were the spay hooks. I use a spay hook to find and grab the uterus during surgery.  The spay hooks in these packs were markedly different than the ones I was used to.  They were small and thin, almost like paper clips. It definitely took some adjusting to, but I eventually got used to it.

That evening, I wanted to see some of Chiang Mai if possible.  On the drive back, I asked Ian if he had any recommendations. He said that there was a popular shopping street, called the Kalare Night Bazaar, that might be fun to visit.  Then, he made the most useful suggestion of the entire trip.

He said that I should download the Grab app onto my phone. He said Uber was forbidden to operate in Thailand, and that Grab was the main taxi app in Thailand.  I downloaded it, and it’s almost identical to Uber in the way it operates. Fares are paid in cash, though. Prices are incredibly cheap.  So, after a quick dinner at the hotel, I “Grabbed” a cab to the night market, for only 187 baht ($6).  I have no idea if or when I’ll ever return to Thailand, but I’m keeping that app on my phone.

The market primarily occupied one long major street, but there were many branches off that street that radiated outward, filled with secondary markets.

The number of vendors was overwhelming. Hundreds of stalls and stands, selling all types of souvenirs.

T-shirts, knick-knacks, statuettes, singing bowls… you name it, it was there.

About halfway down the main street, there was a very happenin’ food market.

Lots of people milling about, purchasing tons of food.

I liked this French fry stall: FKNG FRIES.  They left out all the vowels in the first word, but I think we can figure it out.

Although the spay/neuter project was to end tomorrow, I had extended the Chiang Mai portion of this trip by an additional day and a half, and my itinerary already included another well-known Saturday night market and a large Sunday market.  I used this Kalare Night Market as a way to see what kind of items I could expect to find here in Chiang Mai and what they typically might cost.  Before I knew it, three hours had flown by, and it was 10:30 p.m. I used Grab to get a cab back to the resort.  Tomorrow would be a busy day.