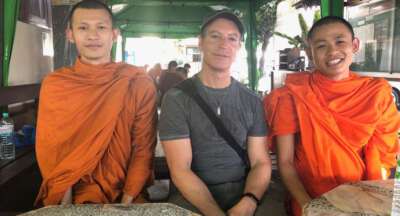 My new Chiang Mai hotel, the Green Tiger Hotel, was a charming little place in the heart of the old town.

My room was standard, but very nice.

Attached to the hotel is a popular vegan restaurant, Reform Kafe.

There’s a cute koi pond in the restaurant lobby, and a small swimming pool on the main floor of the hotel.  I spoke to the clerk at the front desk of the hotel, and she informed me that there were three prominent sights to check out in the immediate area:  two temples and a monument.  Armed with a map that she gave me, I headed to the first temple, Wat Phra Singh.

Outside the first temple, there was a woman selling ice cream.  Each ice cream serving was packaged as a small rectangular block.

There were many interesting flavors to choose from, such as durian (yuck), taro, pandan, lychee, and Thai iced tea.

You choose a flavor, and she impales the block on a small stick, which serves as your holder.  I love the taste of pandan, so I asked for that on the way into the temple.

The temple was beautiful and ornate.

Inside, there was a list of rules to follow, for visitors with no knowledge of Buddhism whatsoever.

There were many tourists, but also some locals, many of who were meditating and paying their respects to the Buddha.

There were a few monks inside as well.

I then headed to the second temple, called Wat Chedi Luang.

It’s really more than a temple.  It’s a pretty big complex, with halls, pagoda, cathedrals, monuments, and a museum.  It was spiritual and stunning.

The centerpiece of it all was Chedi Luang, a 600-year old chedi (pagoda) that was built sometime between 1385 and 1402.  It was 60 meters across at the base, and 80 meters tall, and it once housed the Emerald Buddha, the most sacred religious relic in all of Thailand.   In 1545, however, an earthquake reduced the chedi’s height to half the original size. It’s still pretty big.

As I strolled around the grounds, I came upon a university in the vicinity, and I saw an interesting sign.

Sitting outside the university were some monks, and people were encouraged to stop and chat with the monks.  The monks get to practice their English, and it promotes cultural exchange. I stood there, looking from afar, and was about to walk away, when I saw a sign that said “Don’t just stand looking from afar and walk away”.

I was busted.  So I went over and started chatting with some monks.

They were very friendly, very sweet, and I learned a lot about their lifestyle and schooling.

The third sight was the Three Kings monument.  This was on the way back to the hotel.  I passed by the monument, but the sun was blazing right behind the monument, and it wasn’t easy to get a good photo.

I arrived back at the hotel. It was now 4:30. I was told of a very authentic market in the eastern part of the city.  I wanted to rest a bit, but with my time here being so limited, I decided to check it out before it closed at 6:00.

Walking through Chiang Mai was very nice.  There are cafes and restaurants everywhere, as well as massage parlors, hotels and hostels, clothing stores, souvenir shops, and many small temples.  There’s a languid, placid air about the city.  No one is rushing to get anywhere. Cafes and restaurants are filled with people, but everyone seems to be moving at a calm, measured pace, unhurried and relaxed.  The focus seems to be on just enjoying your time.

I arrived at the market, which was spread out over several blocks.

To my eye, it appeared to be a maze with no structure to it at all.  I wandered through the different streets, until I stumbled upon an indoor market with various fruits, vegetables, and bags of beans and nuts, plus kitschy souvenirs.

Dried fruits seemed to be a popular item here.

Being a New Yorker who visits our Chinatown regularly, I am familiar with many exotic Asian fruits, but I don’t often see them in dried form like this.

I purchased a package of dried longan, a fruit that Mark really likes, to bring back to him.

I also spotted a packet of khao soi curry mix.  I told Mark about the khao soi that I had eaten the previous day, and he said that he had never heard of it.  I loved it, but didn’t think I’d ever get to try it again. Now, with this packet of khao soi mix, there was hope.  The market was starting to close, so I headed back to the hotel. On the way back, I passed by a store selling a type of pants that are commonly worn by the hill tribe members.  I saw these pants at the first night market that I went to, two days prior, but I didn’t buy them.  I regretted that. Here they were again, and at a slightly better price than at that market. I bought myself a pair, and grabbed a pair for my friend Robb back home. These pants are perfect beachwear, and look great with sandals.  Robb plans on visiting me when I’m back in Amsterdam in August for Gay Pride.  It’ll be pretty warm at that time. I thought perhaps we’ll wear these beachy pants there, at some of the many festivals and outdoor parties. (Note: Robb thought they were ridiculous and he said he wouldn’t be caught dead in them. So now I have two pair.)

I relaxed in my room for an hour or two.  I had made a conscious effort to drink a ton of fluids throughout the day, and this was paying off nicely.  I had no twinges of kidney pain at all.  As far as I could tell, my kidney problems were on their way to becoming a thing of the past.

Markets are big in Chiang Mai.  Saturday night is known for having an exciting market, with great food, and lots of interesting items for sale.  My plan for Saturday night was to check out this bustling market.  According to Google Maps, it was a pleasant 25-minute walk from the hotel.  Walking through Chiang Mai is really the best way to spend your time. The streets are wide, and there are so many nice little stores and eateries.  I thought I would get food at the market, but as I got closer, I hit a block that was just one open-air restaurant after another.  The food was ridiculously cheap, and these places were filled, with both tourists and locals.  One popular place caught my eye, and the menu outside looked enticing. I decided to sit and have a nice meal by myself. I chose the flat noodles with pork for 50 baht, and a kiwi smoothie, for 40 baht. Total cost for dinner: $3.  The place had free WiFi as well, so I made a FaceTime call to Mark, which was kinda neat.  He’s a foodie, and he got to see my authentic meal, and I was able to have some company while I ate. Working alongside his family in the restaurant was a very cute little boy of about 8 or 9 years of age. His job was to bring drinks to the tables.  He brought over my kiwi smoothie. When it was time to pay, I gave the woman a 100-baht note. She was about to give me a 10-baht coin as change, but I gestured to her that I wanted that to be a tip for the little boy.  This caused her to break out into a huge grin. She gave the boy a coin, and he looked at me and smiled adorably. These are the travel moments I live for.

I arrived at the market, and it was buzzing.

The variety of food on offer was impressive.  There were a lot of seafood options. Giant fish being grilled.  Huge squid.  Kabobs of every type.

Crabs, lobsters, crawfish…  there was everything.

There were lots of desserts as well.  I watched a Muslim woman creating these mouth-watering pastries that resembled roti.

There were many fillings available.  Initially, I was just interested in videoing her making these delicacies, but I soon found myself unable to resist, and I decided to get one filled with banana, and topped with chocolate sauce.  Heavenly.  Devoured in two minutes.

I then crossed the street to the more commercial area, and after a little wandering, I found the main strip with all of the vendors.  It was mostly the same fare at all of these markets, i.e. trinkets, wallets, wind chimes, small wooden elephants, t-shirts, refrigerator magnets, jewelry, incense holders, etc.  It’s fun to peruse, but there are few things worth buying.

About halfway down the street, the road divided, with a smaller branch diverting to the right.  I elected to take that fork in the road to see if there might be anything different for sale. There wasn’t, however, at the end of that branch, I came upon a street performance that was memorable for just how awful it was.  An enthusiastic singer (I used that term generously) was delivering his song in a flat, strident voice, while an amateurish band played behind him.  Most of the musicians were drowned out by a whiny string instrument that sounded like a seriously out of tune violin. It was simultaneously horrible and fascinating. Amazingly, the crowd seemed to be eating it up, with many members of the audience joining the singer for some impromptu dancing.


I confess to watching for almost a half hour before deciding to head back to the hotel.

I was exhausted from all the walking I had done that evening, and I was going to use my Grab app and get a cab back, but walking in Chiang Mai is such a treat that I decided to just walk back. I passed by the Three Kings Monument again, but this time, it was lit up nicely and was much more photogenic.