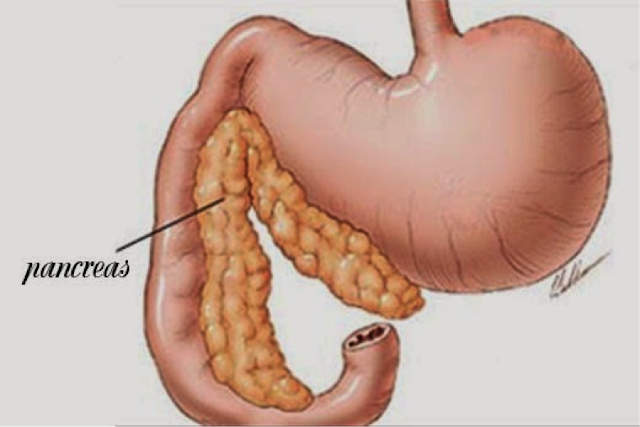 Feline Body Parts – The Pancreas of a Cat

They say that big things come in little packages, and nowhere is this more apparent than the feline pancreas.  This small organ, often weighing no more than 6 to 8 ounces, plays a huge, multifaceted role in maintaining your cat’s health.

The pancreas is shaped like an upside down V.   The left lobe of the pancreas is nestled up against the stomach, while the right lobe runs alongside the duodenum (the first part of the small intestine).     The amazing thing about the pancreas is that it acts like two organs in one.  On the one hand, it is an endocrine organ, i.e., it produces essential hormones such as insulin and glucagon, which control the level of sugar in the blood.  These hormones are released from the pancreas directly into the bloodstream. The pancreas also functions as an exocrineorgan, releasing enzymes into the small intestine that are essential for proper digestion of the proteins, fats, and carbohydrates found in food.  These enzymes are released through little ducts that open directly into the intestine, rather than into the bloodstream.

The most common disorder involving the pancreas is diabetes.  It occurs as a result of inadequate or improper secretion of insulin.  Although any age cat may be affected, middle aged and older males are at increased risk. Obesity is a predisposing factor.  Interestingly, Burmese cats are four times more likely to be stricken with diabetes compared with domestic shorthaired cats.  The classic clinical signs of diabetes are excessive thirst (polydipsia), increased urination (polyuria), extremely good appetite (polyphagia), and weight loss. Some diabetic cats exhibit weakness in their rear legs, a condition called diabetic neuropathy.  The diagnosis is usually straightforward.  The presence of a high blood sugar in conjunction with sugar in the urine confirms the diagnosis.  Treatment of diabetes involves administering twice daily injections of insulin under the cat’s skin.  Diets that are high in protein and low in carbohydrates are also an important part of the management of diabetes.  In fact, a small percentage of diabetic cats can be managed solely with a change in diet.  Most cats, however, require insulin injections.  In some diabetic cats, early diagnosis and aggressive dietary and insulin therapy may cause the diabetes to resolve.   Pancreatitis (inflammation of the pancreas) is another common disorder. The clinical signs of pancreatitis vary widely and may include poor appetite, fever, vomiting, diarrhea, lethargy, and abdominal pain.  For years, veterinarians have grappled with diagnostic tests for pancreatitis.  The disorder cannot be diagnosed based on historical or clinical signs alone because the signs mimic many other diseases in cats.  Some cats with pancreatitis may have an elevated white blood cell count, a mildly elevated blood sugar, and a mildly decreased calcium level, but these findings are inconsistent and non-specific. X-rays are rarely helpful. Ultrasound is better, but is costly and results are subjective and highly dependent on the skill of the ultrasonographer. The lack of a simple, reliable blood test specifically for pancreatitis has caused the disorder to be under-diagnosed, or misdiagnosed entirely. Fortunately, the recent development of the feline pancreatic lipase immunoreactivity (fPLI) test has greatly increased our ability to diagnose this frustrating disorder.  Normal cats have low levels of fPLI circulating in their bloodstream.  Cats with pancreatitis typically show dramatic elevations of their fPLI levels.    Treatment of pancreatitis is mainly supportive.  Intravenous fluid therapy is necessary to ensure that the pancreas is well perfused with blood.  If nausea or vomiting is present, the use of anti-nausea drugs is warranted.  Abdominal discomfort is a common component of pancreatitis, and the use of pain medication typically is part of the treatment plan.  Cats that won’t eat may require an appetite stimulant to promote proper nutrition.  The prognosis for cats with pancreatitis varies, although most cats do recover.   A less common pancreatic disorder in cats is exocrine pancreatic insufficiency (EPI).  In this disorder, the pancreas does not produce enough digestive enzymes.  Cats eat their food, but they can’t digest it, so they lose weight.  They often compensate by eating more, but to no avail.  Affected cats usually have greasy, foul-smelling diarrhea.   In dogs, EPI is usually a genetic condition, with German Shepherds being predisposed.  In cats, the genetic form is rare.  Feline EPI is usually a sequel to chronic pancreatitis.  Repeated bouts of pancreatitis result in scarring of the pancreas.  As scar tissue accumulates in the pancreas, the organ becomes less able to produce digestive enzymes, and cats develop EPI.  A blood test, the feline trypsin-like immunoreactivity test (fTLI) (not to be confused with the fPLI test) easily diagnoses the disorder.  If the fTLI test comes back low, the cat almost certainly has EPI.   Treatment, fortunately, is simple.  Pancreatic enzyme powder, added to the food, corrects the enzyme deficiency.  Cats will gain weight and the diarrhea will resolve.  Affected cats require supplementation for the remainder of their lives.