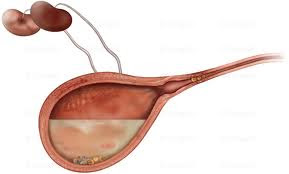 In a past blog post, I described the important role the kidneys play in a cat’s overall health.  In addition to making hormones and regulating the blood pressure, the kidneys filter toxins from the bloodstream, creating urine in the process.  So where does that urine go after it is manufactured by the kidneys? Anyone who’s waited in line for the bathroom at a baseball game knows, it’s the bladder!

The bladder is a muscular organ found in the pelvic region of the abdomen.  Unlike the multitalented kidney, the bladder has one task, and one task only:  to store urine.   Once the bladder reaches a certain degree of distention, nerves in the bladder send a signal to the brain that it’s time to urinate, and the cat trots off to (hopefully) the litter box.   Inflammation of the bladder – cystitis – is one of the most commonly diagnosed feline disorders.   There are several characteristic signs of bladder inflammation in cats:  frequent trips to the litter box (pollakiuria); straining to urinate (stranguria); urinating in inappropriate places (periuria); and presence of blood in the urine (hematuria).  Cats with cystitis may show any or all of the signs described above.

There are many potential causes of cystitis.  Bacterial urinary tract infections (UTIs) are a common cause.  Female cats, longhaired cats, diabetic cats, and cats with kidney disease are at increased risk for acquiring UTIs.  The formation of crystals in the urine (crystalluria) may lead to cystitis.  The crystals can irritate the delicate bladder lining, resulting in inflammation.  Bladder stones (cystic calculi) are another common cause of cystitis.  Crystals in the urine may coalesce to form a small stone (or multiple stones). The stones usually cause severe irritation to the bladder, and cats often show all of the symptoms described earlier, most notably blood in the urine.  Tumors of the bladder do occur, but thankfully, they are an exceedingly rare cause of cystitis in cats.

Diagnosing the cause of a cat’s cystitis requires a few specific diagnostic tests.  The most basic of these are a urinalysis, urine culture, and an x-ray.  Ideally, the urine should be obtained in a sterile fashion so that a urine culture can be performed at the same time.  Urinalysis allows us to assess the urine for the presence of red blood cells, white blood cells, and crystals.  Sometimes, bacteria are seen microscopically in the urine, confirming a diagnosis of a UTI.  However, if bacteria aren’t identified on a urinalysis, it does not mean that a UTI isn’t present.  Culturing the urine is the gold standard for confirming the presence of a UTI.  Even if bacteria are seen on a urinalysis, a culture should be performed.  A urine culture identifies exactly which bacterial species is causing the infection and which antibiotics would be most effective against it.   An x-ray should be taken to see whether a bladder stone is the cause of the cystitis.  Most bladder stones are radio-opaque, meaning that they will be visible on an x-ray.

Sometimes, when evaluating a cat with symptoms of cystitis, the x-ray shows no stones, the culture shows no infection, and the urinalysis shows no crystals.  All the urinalysis reveals is the presence of blood.  We call this condition “idiopathic cystitis”, which is a fancy medical way of saying that there is no known cause for the bladder inflammation.  In fact, this is the most common cause of cystitis in cats.

In the past few years, it has been recognized that idiopathic cystitis in cats closely resembles a type of cystitis commonly seen in women, called interstitial cystitis.  The term “feline interstitial cystitis (FIC)” is now thought to be a more appropriate term than idiopathic cystitis.   The treatment of cystitis is dependent on the cause.  Urinary tract infections are treated with antibiotics.  Crystals in the urine can be controlled or eliminated by feeding prescription diets designed for this purpose.  These diets are restricted in the minerals that comprise the crystals, and they are formulated in a way that results in the urine having a pH between 6.2 and 6.6, which is ideal for preventing crystal formation.  Bladder stones may have to be removed surgically, however, depending on the mineral composition of the stone, it may be possible to dissolve the stone by feeding a severely mineral restricted, highly acidifying prescription diet for a few weeks.

Feline interstitial cystitis is the most common cause of cystitis in cats, and often the most challenging to treat, because no specific cause has been identified.  Over the past decade, however, research at The Ohio State University has revealed that environmental stress often plays a substantial role in the development of FIC in cats.  Indoor cats frequently find themselves without acceptable outlets for their natural instinctive behaviors such as hunting for food, hiding from predators, and scratching.  The stress of this lifestyle can manifest in several ways, such as development of FIC.  The Ohio State University has developed The Indoor Pet Initiative, a program designed to advise pet owners on how to modify and enrich the environment for indoor cats, alleviating many of the stresses that can lead to illnesses like FIC.  As a feline practitioner, I strongly support the sensible suggestions offered.  With stress-related illnesses, preventing the problem from occurring is a much wiser approach then trying to remedy the problem after it becomes established.  For more information on environmental enrichment for indoor cats, visit the Indoor Pet Initiative website at https://indoorpet.osu.edu/home